There are some places you can easily go back to over and over again.

Banaue is not one of them.

Our first and last trip (so far) had been almost two years ago for an assignment for AsianTraveler magazine, and back then we were quite apprehensive of the uncomfortably long bus ride, the intermittent drizzles, and the fact that the rice terraces didn’t look their best.

It had been the first week of March, just after Panagbenga weekend in Baguio where it was sunshiny and all, so it was quite disheartening to arrive to wet roads, muddy tracks, overcast light, too much fog, and mountain air that’s waaaaay too cold. 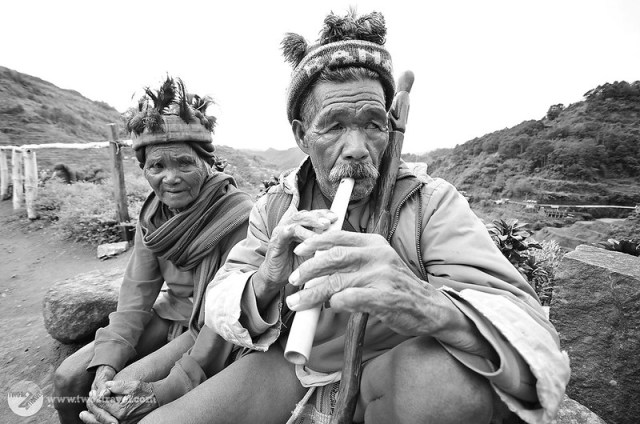 For one, it wasn’t like the technicolor mountain city that is Baguio we see everyday, considering they’re practically neighbors. On those three days, we shuttled via tricycle along one road that snaked all the way to the other towns, a whole community clinging to its both ends, giving way to vast valleys (and of course, rice terraces) down below and to as far as the eyes can see (that is, if it’s not covered in a thick wad of fog, which then was like a pesky fly that wouldn’t go away).

Treading slippery roads and hugging cold mountain air weren’t exactly new, but somehow they put everything in better perspective. We saw a community brimming with life, not so much because it really had to live up to expectations from having a so-called world wonder around, but because that’s how the people have always been in the first place. Its people, after all, are Banaue’s true treasure. 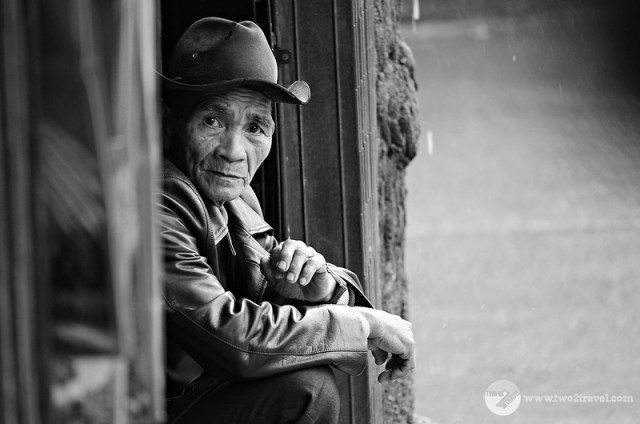 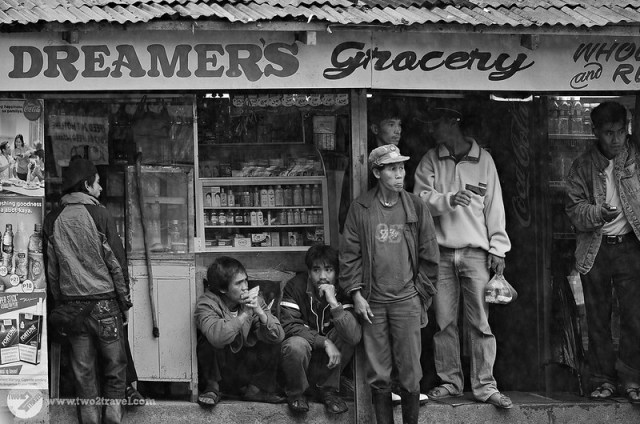 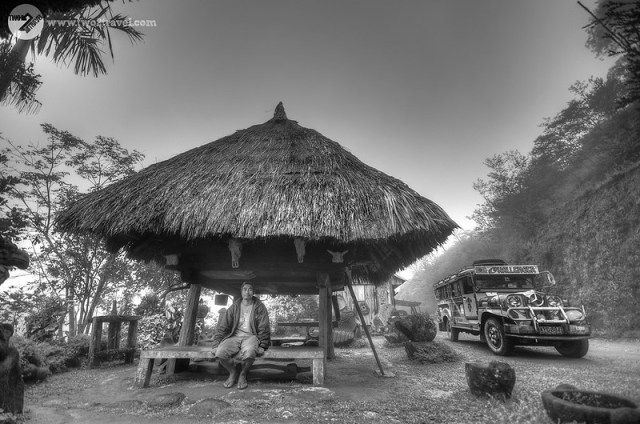 A man in a traditional hut, called fal-e, in Hungduan 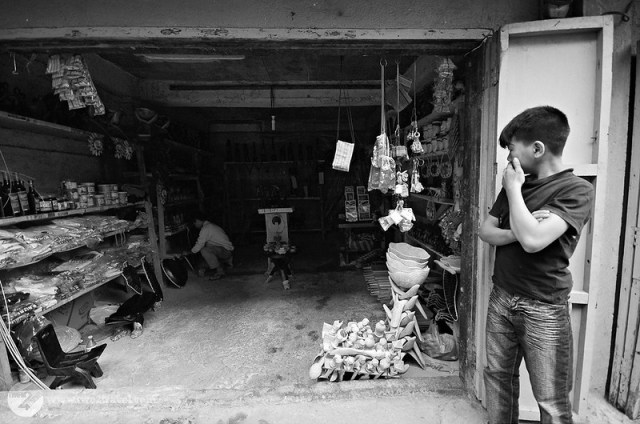 One of the curio shops in Banaue’s town proper 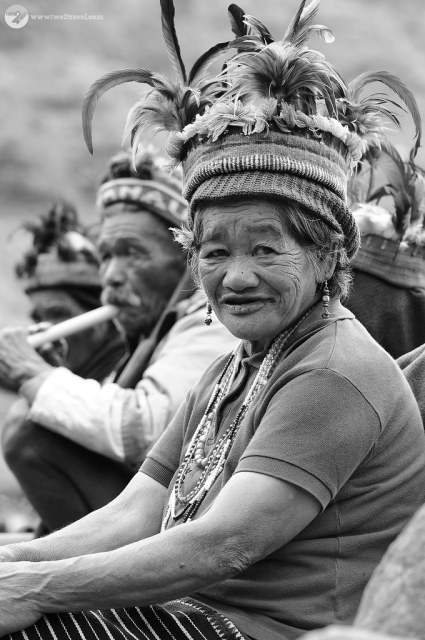 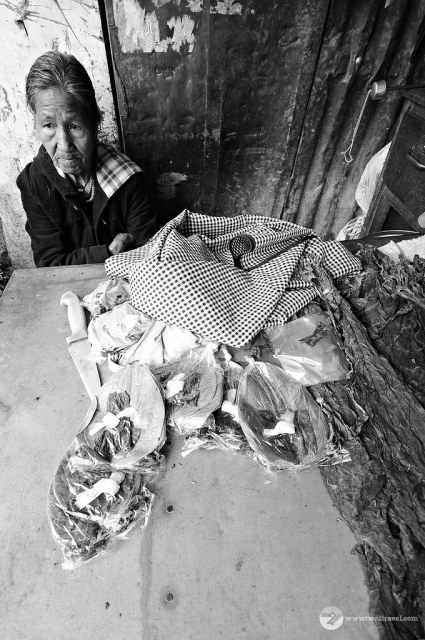 A seller of moma (betel nut), which could very well be their version of the cigarette 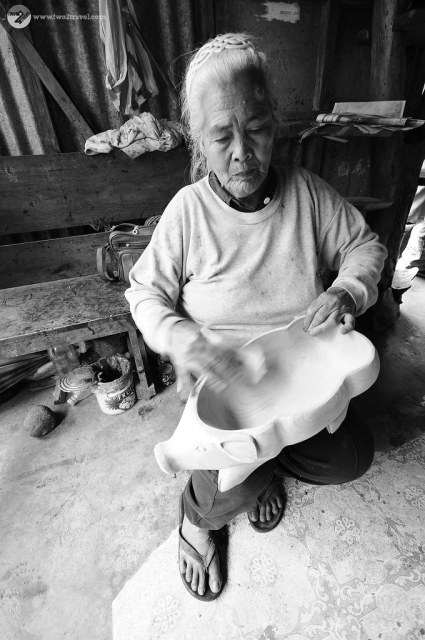 Souvenir shop owner polishing off a wooden pig tray. The Ifugao are such fine craftsmen and artists, and the Rice Terraces are perhaps their biggest work of art 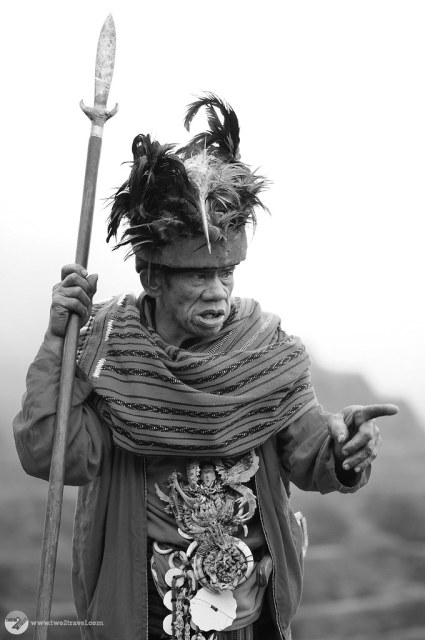 The Ifugao man is both a hunter and a warrior. Beaks, horns, and whole animal skeletons adorn their headdresses and neckpieces like medals of honor. 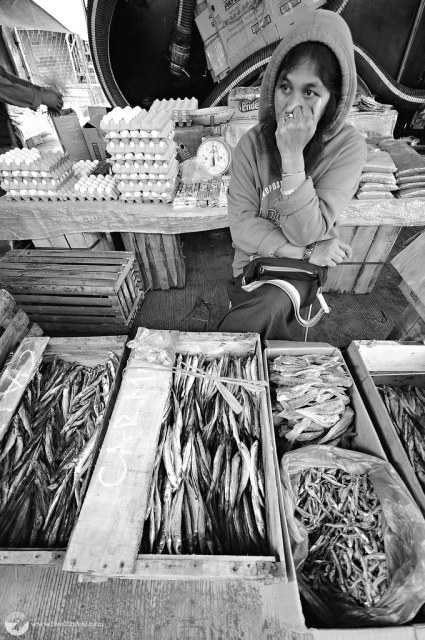 Crates of dried fish transported from the lowlands 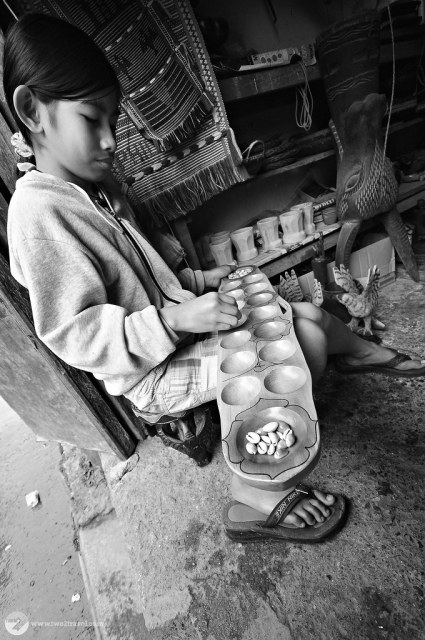 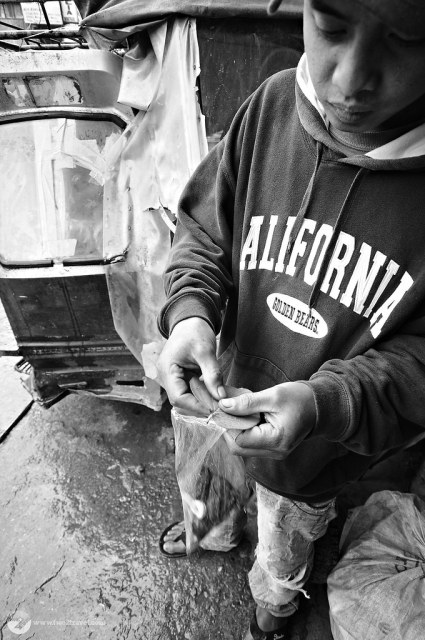 Our guide showing us how the moma is consumed. One folds a betel leaf, with a piece of betel nut inside, and then chews the whole thing. This is an age-old tradition in the Cordillera, practiced until today by both men and women.

“In the Cordillera, aside from helping one pass the time, it ‘oils’ conversation as San Miguel beer would carry barkada talks long into the night and as mugs of steaming barako would bridge several years’ gap between friends…While chewing, the men get to know each other, maybe find a common relation or two and ask about on what’s going on in each other’s side of the mountain. Over moma, the talk extends to an invitation to each other’s ili (town/village), and, in some cases, even contemplating a marriage of their children!” [source: Chewing moma, swallowing culture] 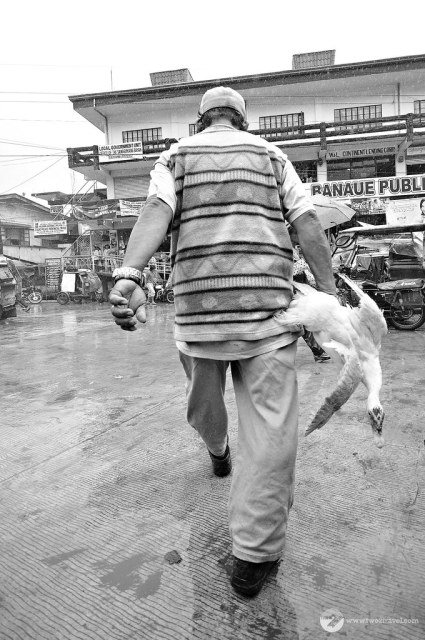 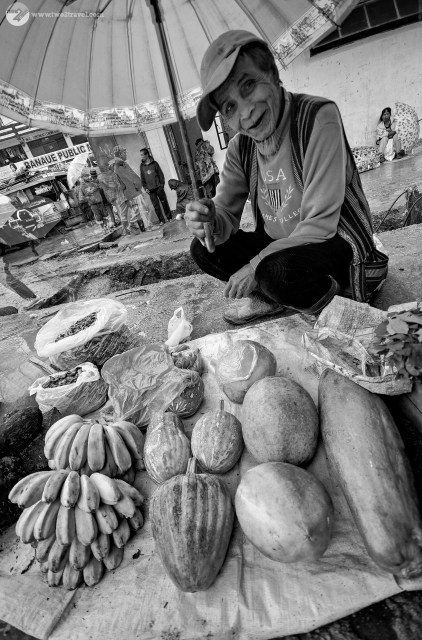 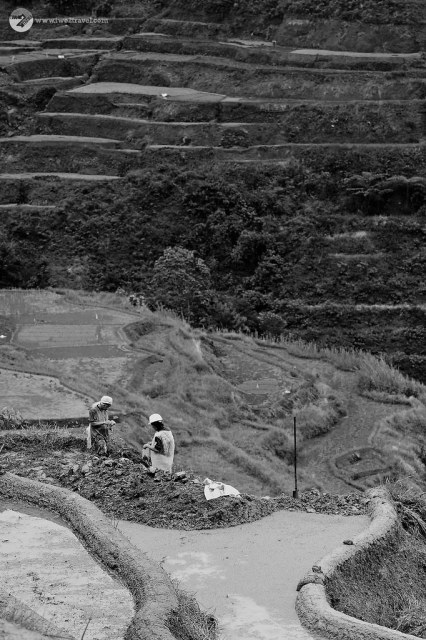 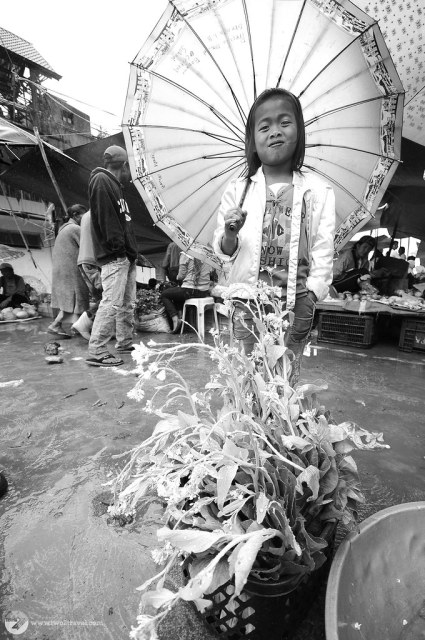 This girl speaks conyo English when selling. Yes, with a twang that would shame all your English teachers. English, next to their local languages, is the most widely spoken language in the Cordilleras. 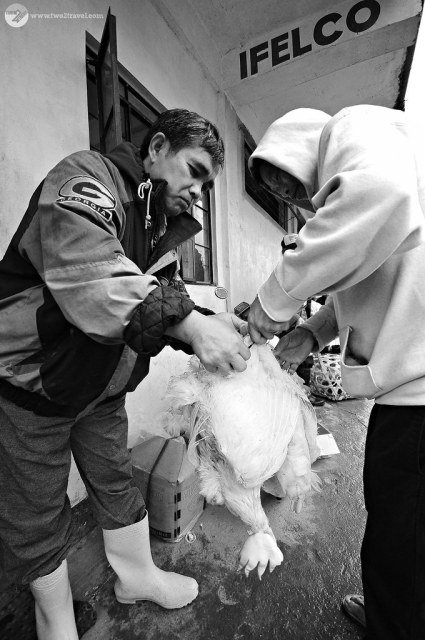 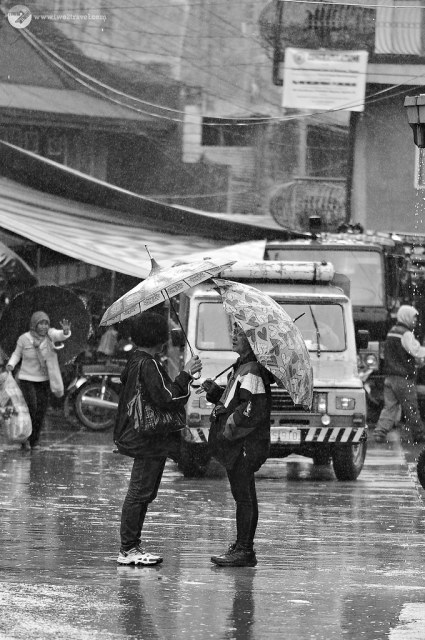 Chika in the middle of the street, under the rains 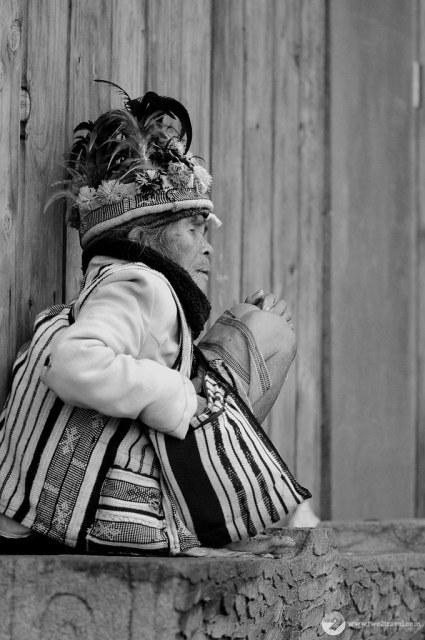 An old woman noiselessly sitting in one of the viewpoints. She was, I think, reaching for a packet of moma at this time. 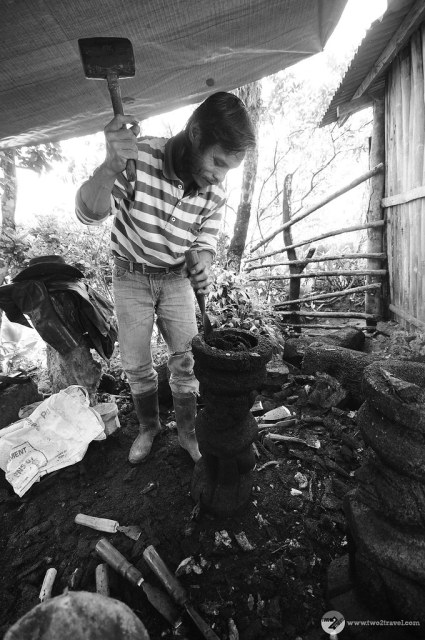 A stone carver in Hungduan

Have you been anywhere in Ifugao? You should.