We had a lot of reservations before finally taking the plunge—literally—to Monad Shoal in Malapascua, northern Cebu to see its thresher sharks.

This tiny island barangay is the only place in the entire world where sightings of this shark species are regular and gratification for those who make the trip is thus fairly guaranteed. But our lack of diving experience—and confidence in taking that plunge to Monad Shoal—was something we still had to deal with. The biggest creature we’ve seen in the few dives we’ve done before this was a meter-long sea turtle in Apo Island. That was definitely a far cry from a shark encounter. Once it had become clear though that we were allowed to dive if we really wanted to, we decided to give it a go.

Into the deep blue

On the day of the dive, we woke at 3:30 AM, were at the dive shop by 4 AM, and on the boat going to Monad by 4:30. It was drizzling on our way to the dive site, but early morning light crept in soon enough.

Though advanced, it was promised to be a relatively relaxed dive since all we had to do—theoretically—was go down, wait for the sharks, watch, and then go up. It sounded doable when you put it that way.

But this proved barely a consolation once we were in the waters. There was a thick rope going all the way down to the shoal, but from the surface this landmass was barely visible because it was located very deep down. 90 feet down, to be exact—as tall as a 30-storey building, and we had to go straight down to it. So it was like free-falling from 30 storeys up, only on slow-mo. This was the scariest thing about the dive (apart from shooting up, which could be fatal). 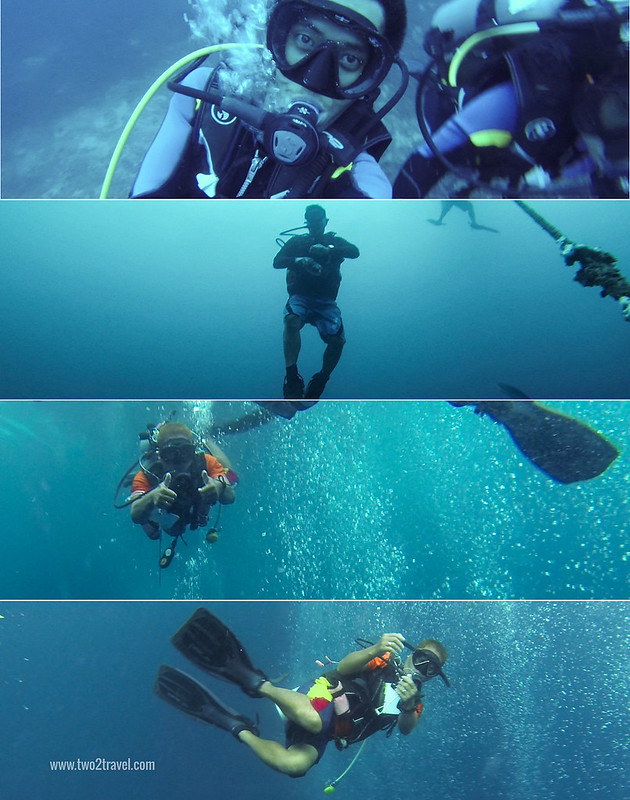 As I was falling deeper and deeper into the waters, I was saying silent prayers for us to emerge from this dive unscathed and, hopefully, with at least one thresher shark sighting.

Soon enough our DM was guiding us to an area on the shoal where a rope was installed for divers to hold on to and wait for a shark to appear. Minutes passed quickly, but no single shark appeared. We transferred to another end of the shoal, still waiting. When there was still no sign of a thresher, we retraced our route back, and then made several other stops in other areas (in between these, one of our companions saw a manta ray; unfortunately almost everyone else was looking in another direction). When I checked my gauge I had already consumed half my air. No thresher shark still.

It was when we were going back to our first area that I finally saw, from the corner of my eye, the body and tail of a thresher shark on my far right side, swimming parallel to us. I had no way to tell who else in my group had seen it. My first thought then was to call out to everybody else to look to the right, but by this time the shark has already swum out of sight. A second later, our DM beckoned us to swim faster to his direction, and I knew then that the shark I had seen seconds earlier was passing by in front.

I finned faster to take my position, fumbling my way to stay still as the shark—its body more or less 2 meters long—emerged and swam in front of us. It glided against the water noiselessly, unmindful of the eight or so bubble-producing humans ogling at it. Its tail moved against the water just as a banner would against the wind, and its body would shimmer as it would hit the sun’s rays streaming from above. It didn’t come near enough though for us to take a closer shot. But there it was, more real than any video footage could be, swimming away into the deep blue, farther and farther away.

Another shark swam past us after that. It circled the shoal once then swam out of sight. The spectacle was over in a matter of seconds.

Before we knew it, our DM was already signaling us to head back up. We kept to the coral-laced rope, which was as thick as an arm, and made our safety stop. By the time we were back on the boat, my hands had several small cuts from gripping the rope too tight for fear of shooting all the way up. The video we managed to take was also pathetic at best. But it doesn’t really matter, does it? The memory of those sharks will always be in full HD.

For accommodations in Malapascua, you can check out Agoda and Airbnb. Both sites are great :D