We went to Davao for the Kadayawan, but we will go back for the crabs.

Make no mistake about it—other crabs have tried, and we will never forget those rock lobsters as thick as biceps at Pandan Island in Palawan—but Davao’s crabs are just the bomb.

We had it at Glamour Restaurant and Cafe, an airconditioned and rather cramped space that has a huge whiteboard where satisfied diners write down their messages (hopefully that wasn’t the last thing they ever did). 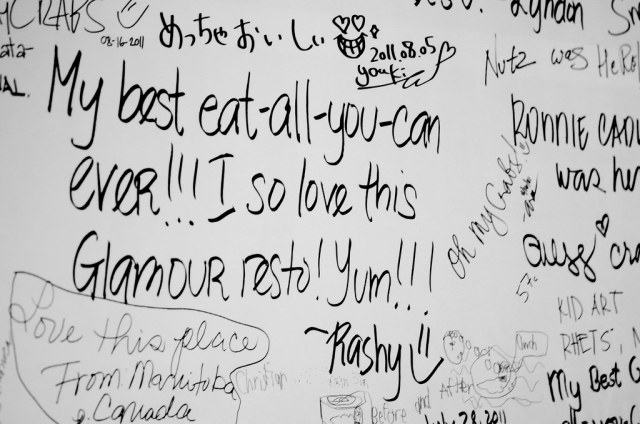 The crab buffet—which also included a bunch of other rather forgettable dishes, including dessert and (unlimited!) rice but not drinks—was one of the best we’ve had ever, and for P390 (8 USD), it certainly delivers. Other buffets, unfortunately, do not even deserve a fourth of the price they demand. 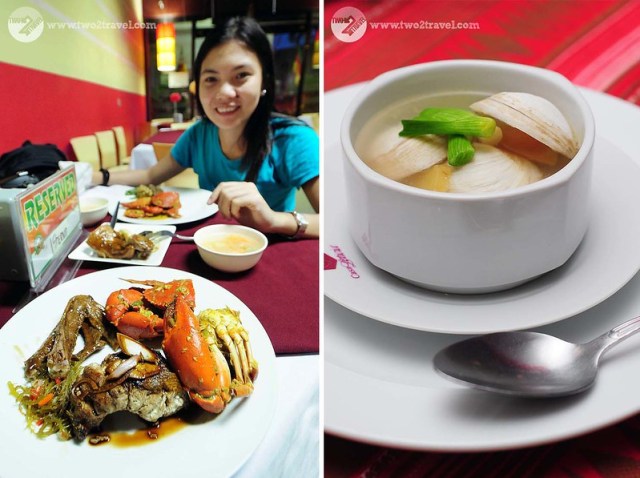 And boy were the crabs HUGE—from one end to another one crab could be as big as our forearm. It was a secret family recipe, that’s as much we learned, but it was cooked in crab fat (aligue), coconut milk, and cholesterol-defying dreams. And it’s served for dinner. 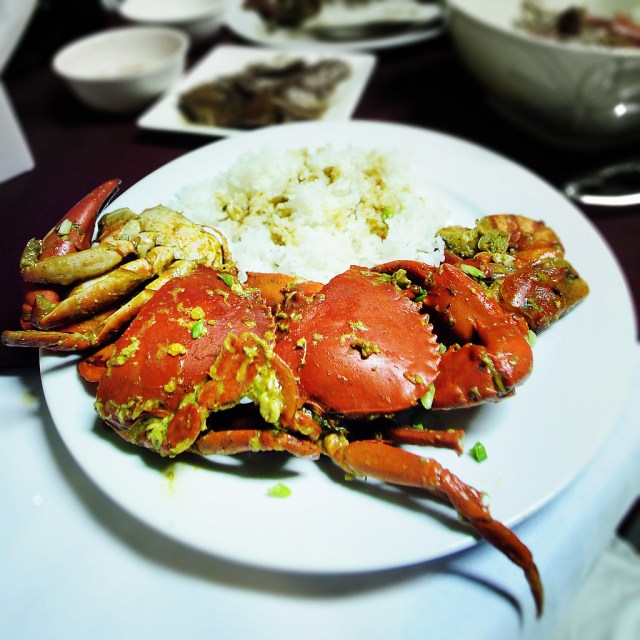 Where to find: Glamour Restaurant Cafe

J. Camus Extension, near Sampaguita Inn 1
They open at 6 PM. Go early to get a seat, as it can get a bit crowded.

The durian ice cream, meanwhile, was a sweet discovery at our hotel. We ordered banana split and got durian instead of vanilla, and surprisingly it was delicious. That was the first and only taste of durian ice cream we had so we couldn’t compare, though a local ice cream chain has recently come up with its durian flavor. We’ve also tasted the real deal—durian in the flesh—but we’d really rather eat the ice cream. 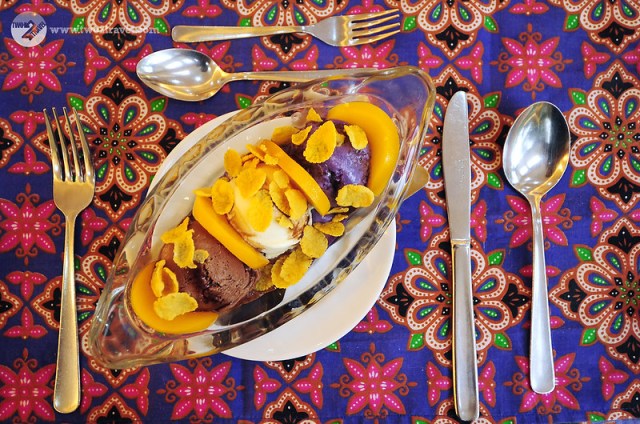 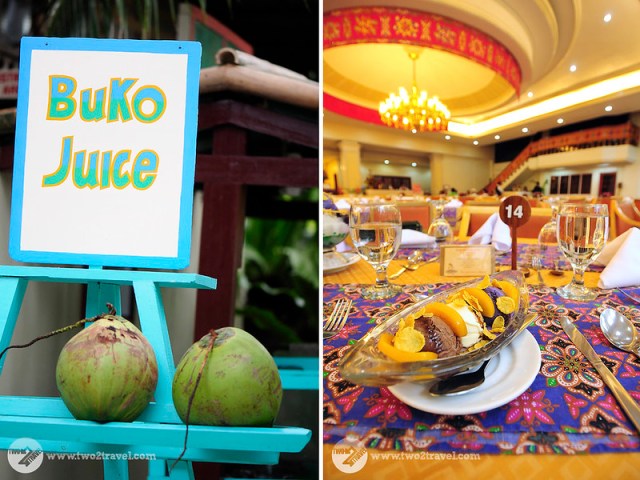 Near the city hall

We almost forgot to mention—the search for those crabs wasn’t straightforward at all. Not having known Glamour only opens for dinner, we headed to J. Camus starving and groggy from our flight and tired from the parade. We walked for about 30 minutes searching for that godforsaken Glamour but we couldn’t find it, so we settled for this quaint restaurant we passed by which we read about online.

We loved the Halaan Soup, which was a refreshing antidote to our bad tempers (or maybe it was the airconditioning and the cushy chairs). We also tried the creamy Sizzling Sisig, said to be one of Davao’s best. We couldn’t compare but it was certainly one of the better sizzling plates we’ve been served. We ordered their rather well-written-about homemade durian pie for dessert. Like anything durian, this was probably something not everyone will appreciate (Owen didn’t), but the ever-so-subtle durian flavor grows on you. You will tend to finish the plate before concluding it’s good. Hey, it is. :) 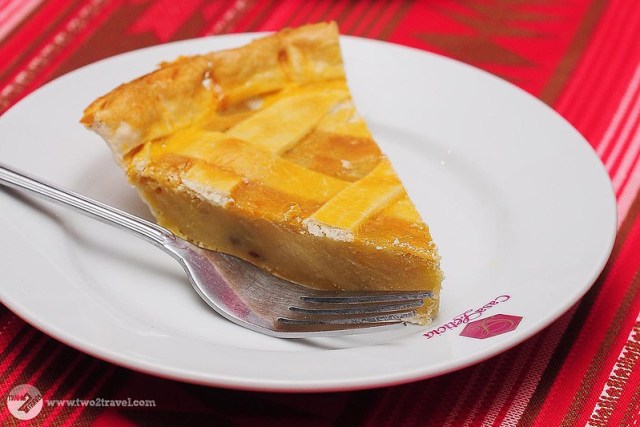 Where to find: Sagay Restaurant

As we said, we came to Davao to see the Kadayawan (see some photos here), but we also did quite a lot in our short three-day stay. We rode an e-trike (which came free for Kadayawan only) and went on a freaking scary five-minute boat ride to Samal Island, only to eat an overpriced cup of ice cream. We’re not saying the island was boring—we’ve since returned and seen its better part on the other side—but it was certainly not for two people who didn’t have the slightest plan and just went anyway.

What to see in Samal:

There’s a fruit bat colony inland (the largest in the world), but you’ll have to take a tour for that (which resorts can arrange for you). It’s an hour-long van ride from the boat docking area. At Pearl Farm Beach Resort, there’s a shipwreck (!) just off the waters for divers. Snorkeling and kayaking activities are available as well. There’s a giant slide and a bunch of other activities we read about recently (which you can access here. Not sure though if they’re the only ones offering the giant slide, which we’d love to try next time). 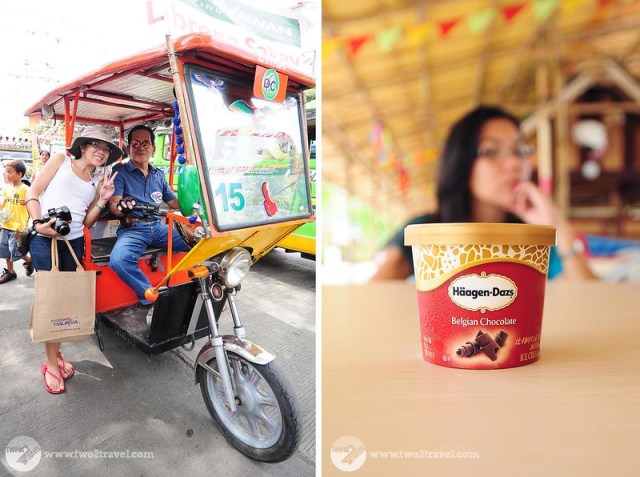 Left: Nikka and our friendly e-trike driver. These are really silent runners and they cost just P50 in electricity each day to maintain; Right: Refusing to head back to Davao without even a photo of what the whole barf-inducing boat ride was for. 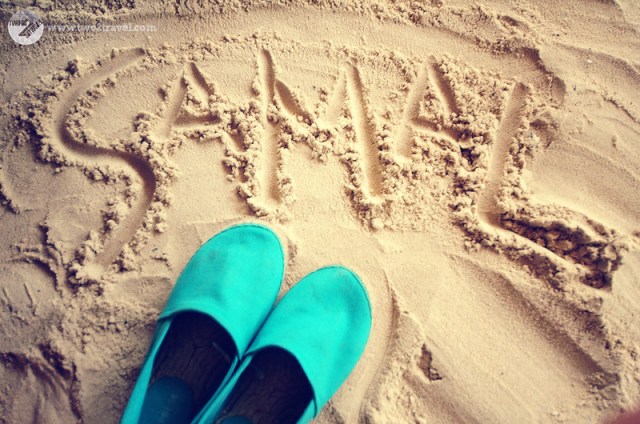 Welcome to Samal, guys and girls. Nice sand. We’ll be back.