Just because it took us 12 hours to bike around southern Batan Island does not mean the whole thing is such a pain in the arse (well, it really was, literally) and that you shouldn’t do it. You can, and for the record, you don’t need ninja biking skills to pull this one off. The roads of Batan Island are generally good, there will always be locals around to help you in case you run into trouble, and the route is easy to navigate even without a guide. 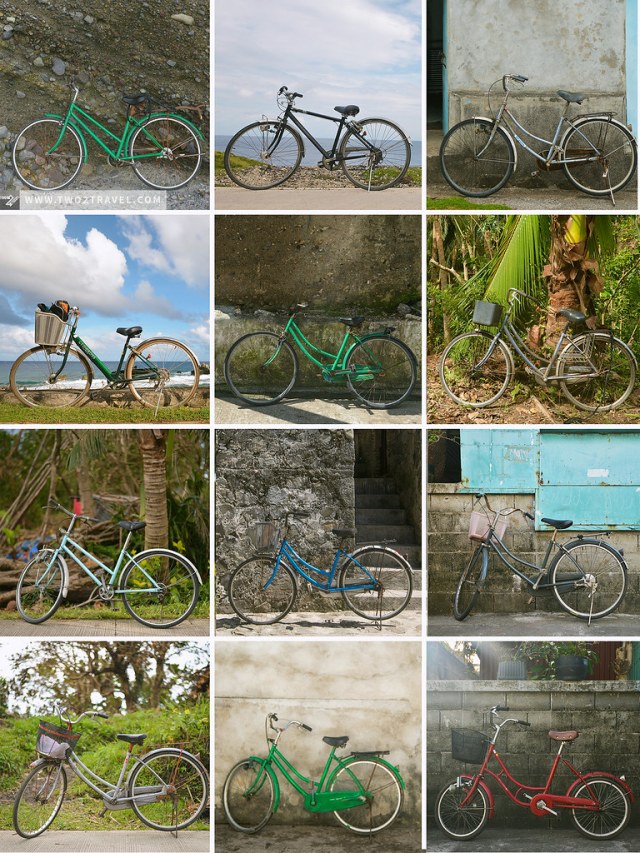 A word of caution, however: biking around Batanes is physically taxing. You need to be fit to do this, not really because the route is dangerously complicated, but because it’s quite long and you’re going to make countless stops along the way because there’s just so much to see.

BIKE RENTAL. We rented our bikes on an hourly basis from our host. The whole trip cost almost P500 for both of us—a pretty affordable price, and definitely cheaper than when we hired a tricycle to tour us around the same spots (a trike tour costs P200-P250 per hour, which really wasn’t workable for us since we take so much time taking photos. Besides, we hate rushing). Since there doesn’t seem to be a shortage of bicycles around Batanes, you can simply ask your hotel/inn if they can arrange for a bike rental for you—that is, if you didn’t bring yours along (and we highly recommend mountain bikes to make everything easier). Or maybe ask the locals if you can rent theirs for the day. Haha. 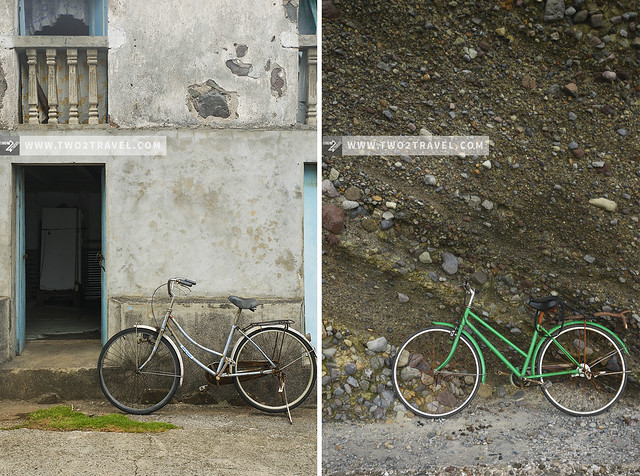 MOTORCYCLE RENTAL. Motorbikes can also be rented, but are subject to rules & limits, i.e., you should have your driver’s license with you. Note though: fuel is extremely expensive in Batanes (diesel goes for P70 per liter here, so you can just imagine how much gas costs).

You’re going to originate from Basco, the capital, where you’re most probably based. Below is the route we followed. It’s not perfect, but we’re discussing it just in case somebody wants to try. 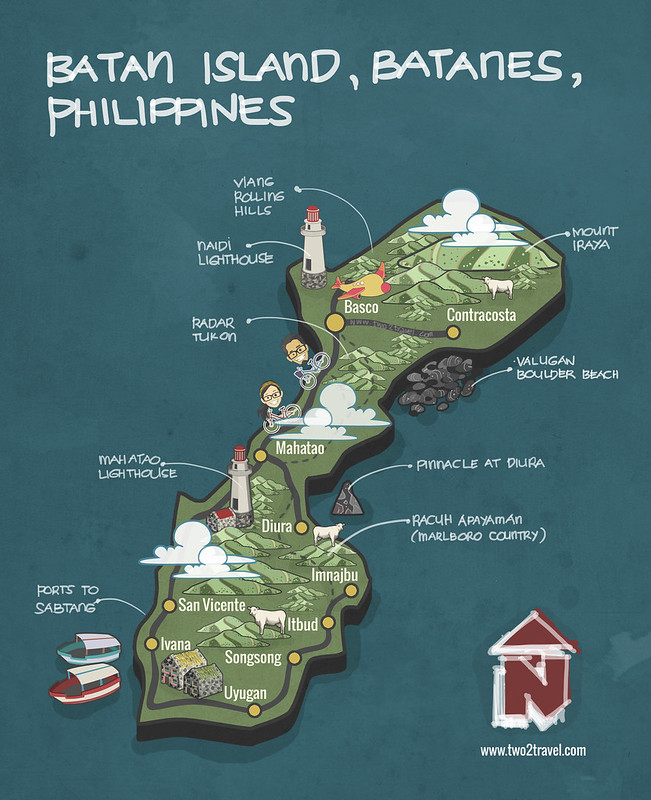 MAP OF BATAN ISLAND. Share it, use it on your own trip, just don’t claim it as your own! If you want a bigger version, email us at two2travelblog(at)gmail.com.

1. Basco
The roads here pass along the mountainside where there are lots of blind curves on one side and the roaring waves of the ocean down below on the other side. Be careful when negotiating this route. We don’t advise you to take this at night since there are no lampposts to guide your way. Everything from motorbikes to trikes to trucks pass by this road too. It’s as narrow as Naguilian Road going to Baguio (only with better views). 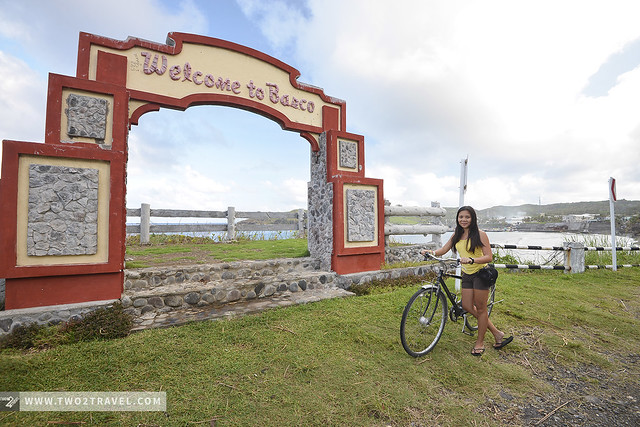 The first of many stops from downtown Basco. Locals simply call it “Welcome”.
2. Downtown Mahatao
Right after the Mahatao welcome post (not arch. see photo), take a left turn at the fork (you’ll see a sign pointing to Diura Fishing Village here. If you want to go to Diura, take this left). 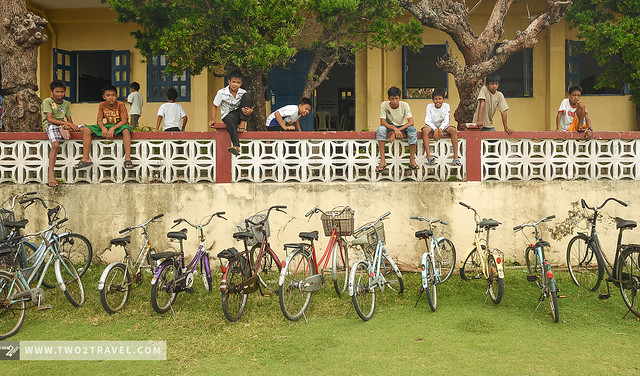 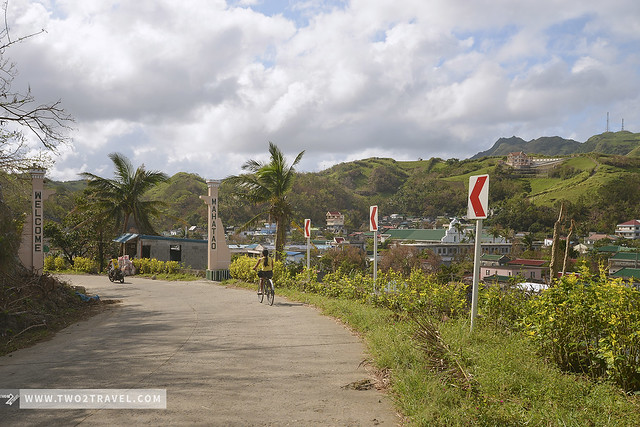 Reaching downtown Mahatao
3. Diura Fishing Village
This will take 15-30 minutes from downtown Mahatao. Once you get to a three-pronged fork, take the middle, which will take you all the way down to the village. You’ll know you’re there when the sea comes to view. 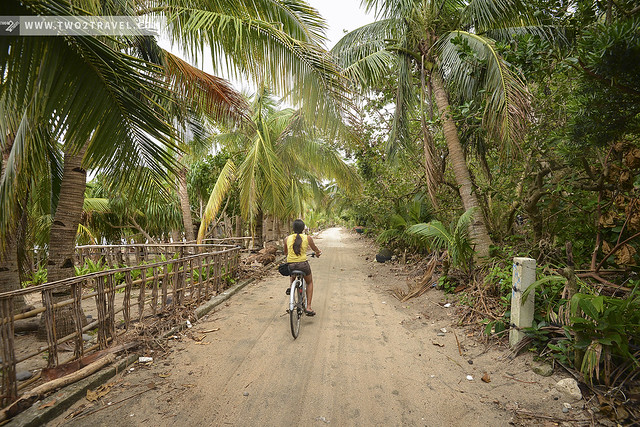 Biking along Diura Fishing Village. Unfortunately, at the time of our visit, most huts lining the beach were damaged from the typhoon.
4. Back to downtown Mahatao
You can have your lunch in one of the restaurants here (we forgot the name of the canteen we dined at, but it’s near the plaza). There’s also an old church nearby.

5. Ivana
The House of Dakay, the oldest stone house in Ivana (not in Batanes, as many accounts would tell you) is found here. The Ivana church, Honesty Coffee Shop, and Ivana port going to Sabtang are also a couple of steps from one another. 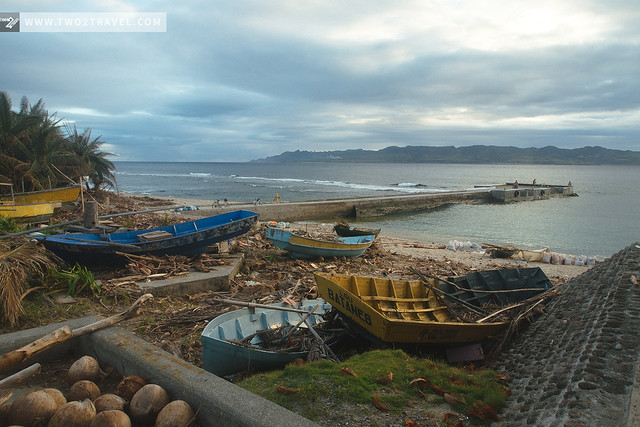 Ivana port and Sabtang Island beyond. If you’re going to Sabtang, this (or the San Vicente port) is where you should catch a faluwa. Tricycle fare from Basco at the end of this post. 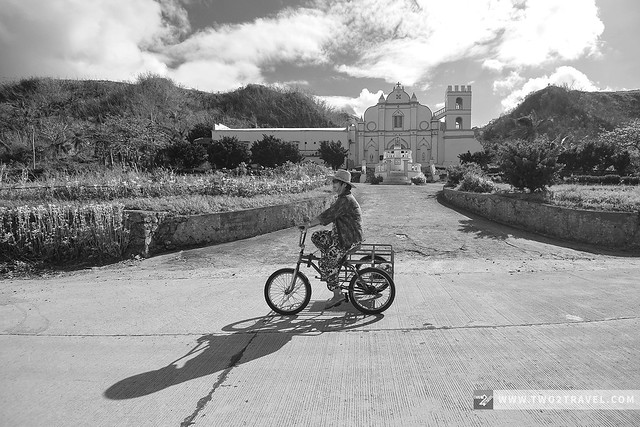 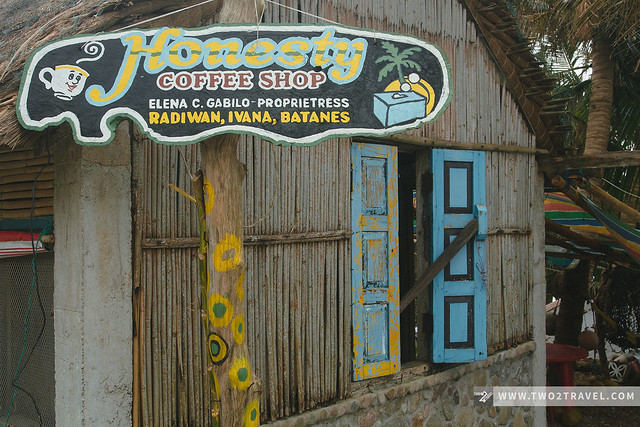 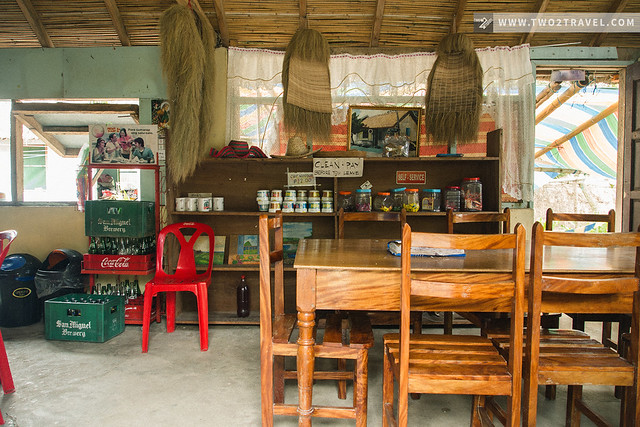 Honesty Coffee Shop
6. Songsong
You’ll pass by Songsong Ruins, an uninhabited village ravaged by a tsunami in the 1950s. 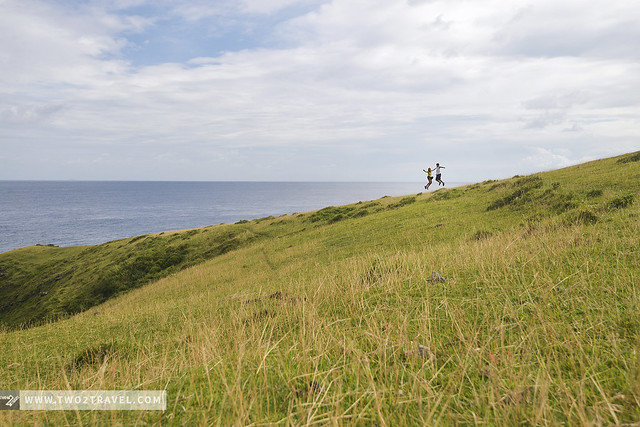 Our legs were so sore but we wanted this souvenir shot. Haha.
7. Uyugan
Verdant hills, stony shores, the works. 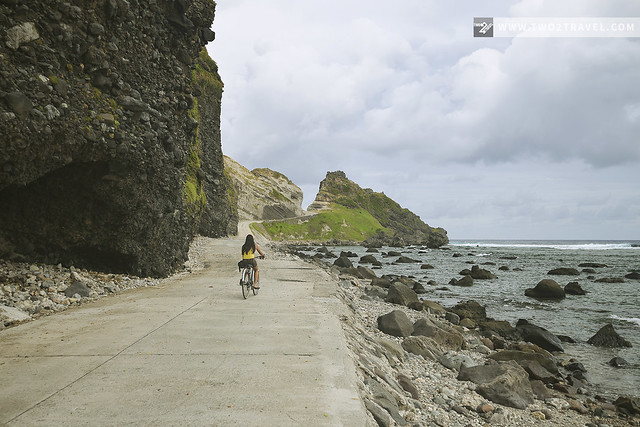 8. Itbud
This is mostly uphill, as you’re making your way back north (please refer to map). 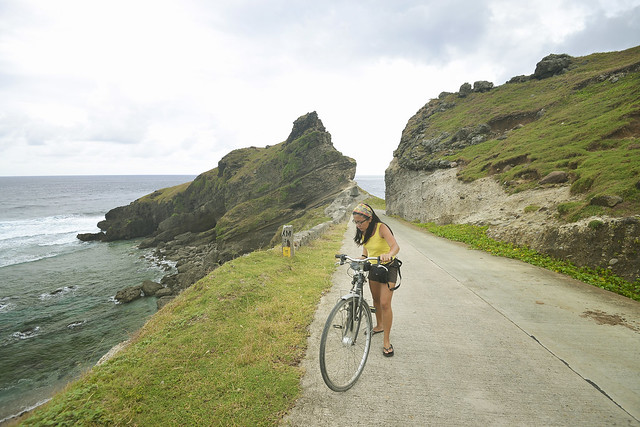 Are we there yet?
9. Rakuh-a-payaman (Marlboro Country)
You’ll reach a a waiting shed and a fork right past it—one going up (left), the other going down. The right goes down to Imnajbu, a seaside town, while the left one marks the ascent to Marlboro Country. This road is partly concrete, mostly dirt road under construction. The ascent took us one hour (hardly any picture-taking happened at this point). 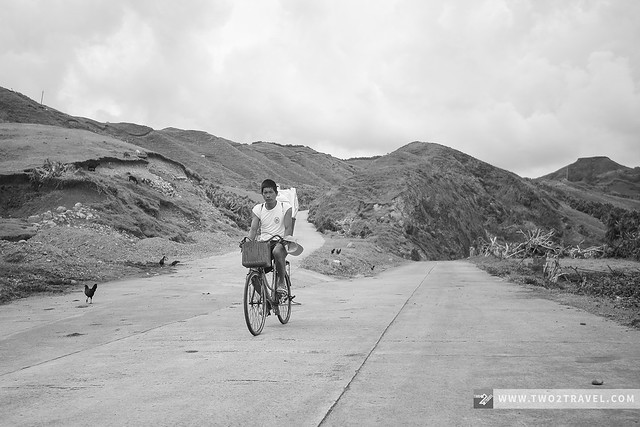 Fork leading to Marlboro Country (left) and Imnajbu (right)
After what would feel like forever, you will reach a gate marking your entry to Rakuh-a-payaman (Marlboro Country). Please close it after you’ve entered (no joke). 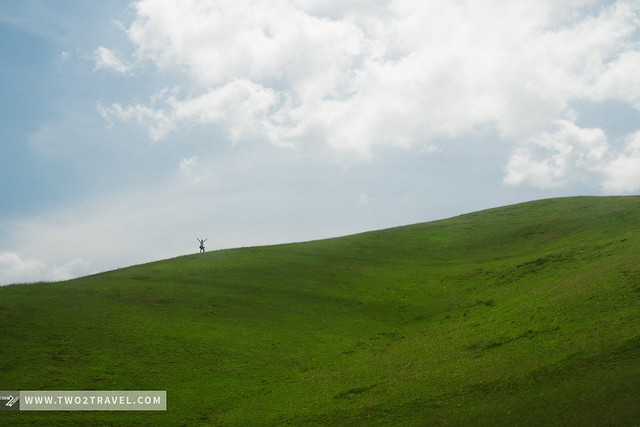 10. Downtown Mahatao
This is the best part: go out of Marlboro Country using its opposite gate (just pedal onwards; if you look at the map, you should be going north. Don’t go back the way you came in). From here, it’s an AWESOME downhill ride for about four kilometers straight. The last few kilometers are the same ones you passed by on the way to Diura Fishing Village. Just keep going left, and soon you’ll emerge at another fork—one going straight through a bridge, the other (right) going up. Take the bridge, which will take you to the inner alleys of downtown Mahatao’s village. One or two turns and voila! You’re at the town proper. Easypeasy.

Bike from Basco to Diura, call for a trike in Mahatao to fetch you at Diura and take you up to Marlboro Country (you can strap your bike onto the trike), and spend an hour or two there. You don’t need to make the tricycle wait, because you can just bike the way down to downtown Mahatao. From downtown Mahatao, you can retrace your route to Basco or you can hire a tricycle to take you back (P120, Mahatao to Basco, with bikes strapped on the trike). We recommend this if it’s nearing nightfall. Or if you’re too tired, just like us. 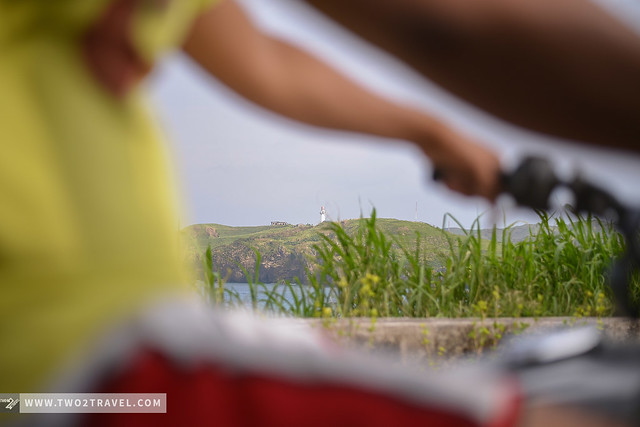 And speaking of tricycles, there’s Matoda from Mahatao and Batoda from Basco—associations of trike drivers whom you can text to fetch you wherever you are. If you’re coming from Diura, it’s naturally cheaper to call for a Mahatao trike. Here are their text hotlines: 0930-373-2854 for Matoda and 0929-703-8404 for Batoda. Fuel is very expensive in Batanes so trikes don’t roam the roads; this is their way of streamlining their operations. And it’s very, very convenient.

Here are the trike fares to the spots along the bike route we mentioned. Please note that these are prices for two people. They may charge more if you’re a bigger party because of the uphill roads.