After a while, the excitement for traveling wanes a little bit, just like anything else.

Feeling too lazy to wake up earlier than usual.
Choosing to be on Instagram rather than be out there (oh but there’s free WiFi!).
Not going on certain legs of the trip for no apparent reason.

But Calintaan Island in Matnog, Sorsogon changed all that. 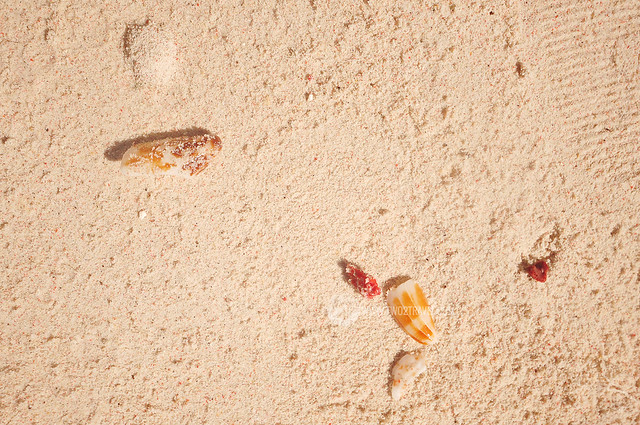 Waking up before 5 AM for the sunrise three hours after turning in, check.
Actually swimming on the beach, twice (we don’t get to do that often), check.

Perhaps it helped that we went to Calintaan with hardly any expectations. And so the surprises began, starting with the water. 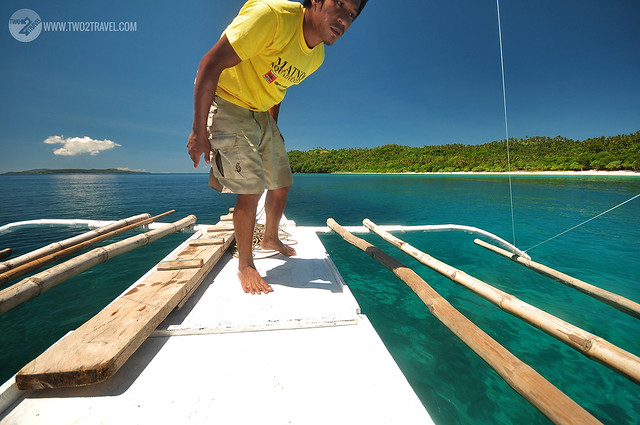 The boat ride to Calintaan Island from the humble port of Matnog, Sorsogon took just about 40 minutes—pretty quick, but enough to send us feeling both amazed and afraid. 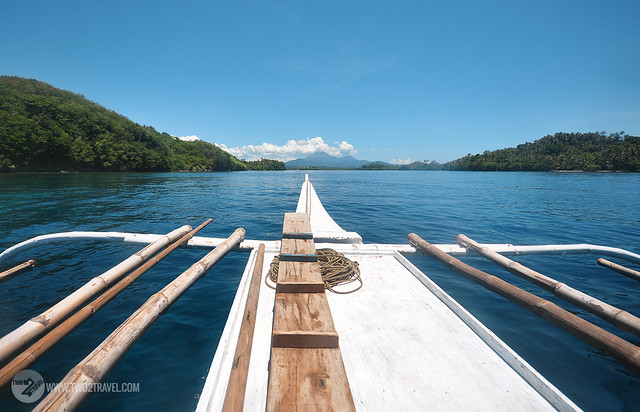 Mt. Bulusan is visible from the waters off the Matnog mainland

See, the waters off mainland Matnog en route to Calintaan have whirlpools.

But because it was summer, the flat seas made our journey smooth, the feelings of foreboding never expressed in words. BUT we did see lots of tiny holes where the currents from all directions somehow converged and, well, formed whirlpools. In bad weather—and we say this to warn and not to dissuade you from visiting—the seas could get rough, and, well, you know what happens to things that get caught in whirlpools.

But boy were the waters so clear. 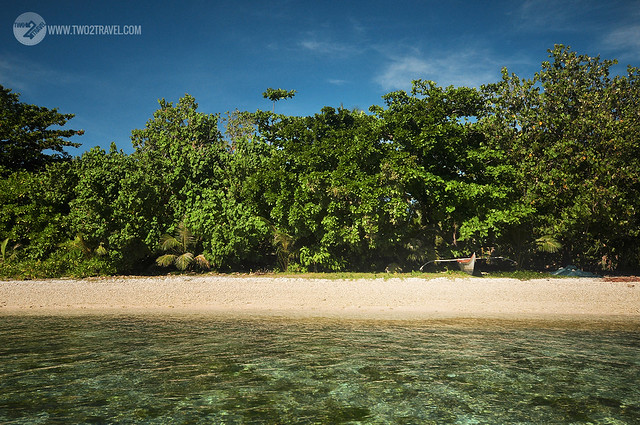 At one point, along a channel between two small islands before Calintaan, the waters were clear as glass and the sand so white we could see the seabed drop so drastically from our boat. It was fascinating and terrifying at the same time, like seeing a giant, wide slide underneath that was—fortunately—not attempting to swallow our little boat whole. Soon after I found myself silently praying that the ride would be over quick. So much for a first impression, but yeah, note taken! 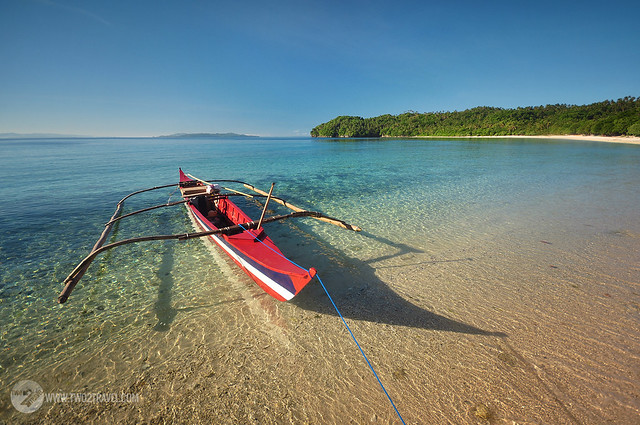 Subic Beach turns out to be just like any other Philippine beach (whut a problem, right?): white coral sand, swaying palms, and clear waters (oops, there goes that word again!). It’s so beautiful I could feel the cliches against my bare feet as I walked the length of the beach half-looking for algae or any of that shiz that usually turns off beach-goers. None. 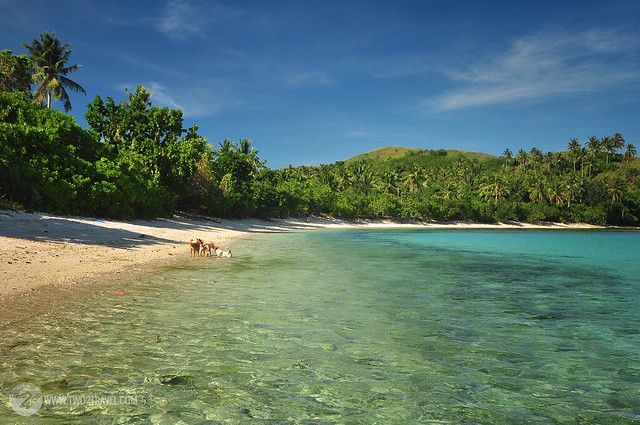 Oh well, maybe we can save the disappointment for somewhere else. For the next 24 hours, our beach would just keep being its perfect self. 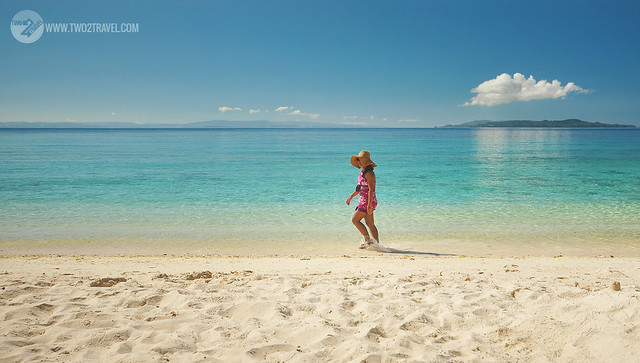 Say hello to my friend L, who goes by the name @robuyah on Instagram. 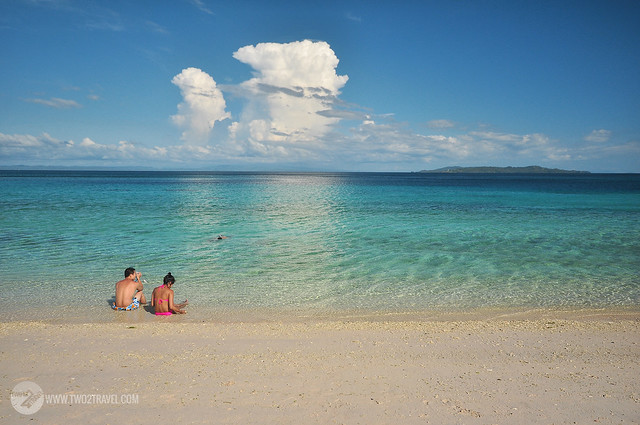 And did I mention we had a bahay kubo (thatched hut, a traditional spartan Filipino home) for the night? It was a nice little surprise, a notch higher (literally) than the tent we had intended to rent earlier. My only complaints were that the ‘room’ was set off too high from the ground that it was difficult to go up and down the steps every now and then; and that there were—I think—lots of sandflies that feasted on me the entire night. My companions didn’t suffer the same way I did though, so maybe you just have to slather yourself crazy with insect repellant. 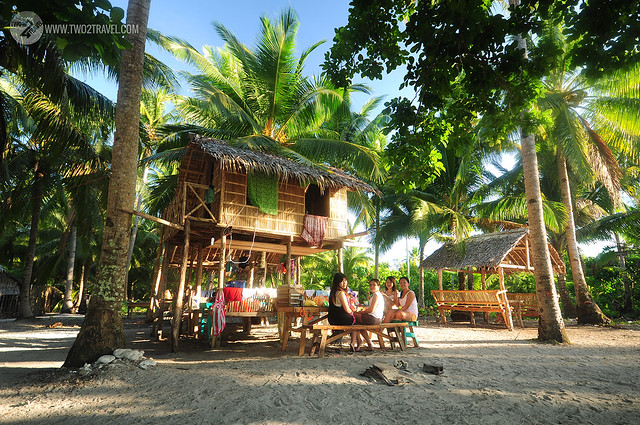 Breakfast with college friends B, J, and L 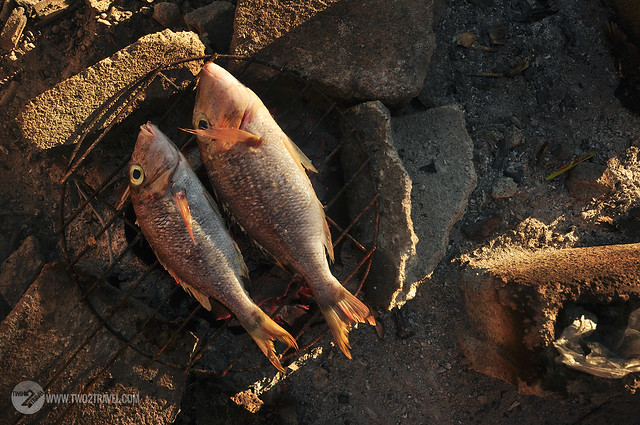 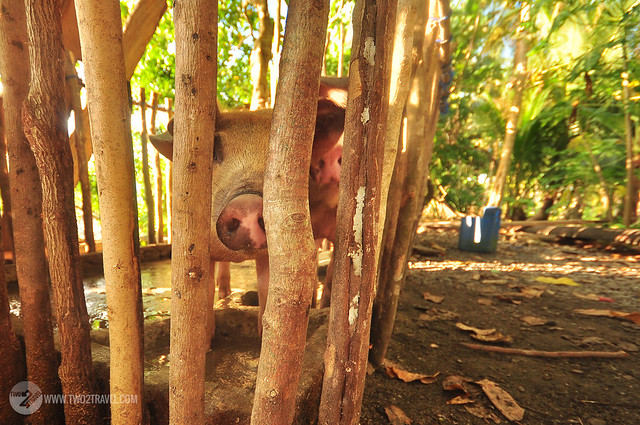 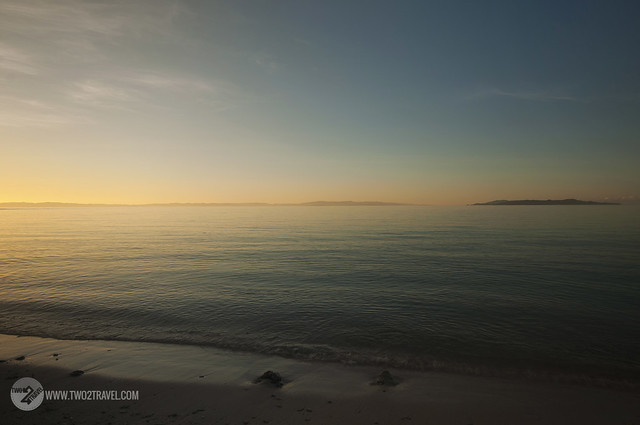 In between rum coke & roasted marshmallows (coz we’re conyo like that), while the three of us who were still awake chatted with our caretaker Manong B, my friend L started pointing to the direction of the beach at what looked like—at least to me—a big orange blur. My friend L thought it was a fire in one of the islands in front of us, but the longer we visually impaired folks squinted, we realized it was the moon. At past 9 in the evening, the moon—that huge ball of orange—slowly rose from the inky-black space we knew was the beach, until it grew smaller the higher it rose.

It was so creepy we were half-expecting some sort of tsunami afterward, but obviously it didn’t happen.

Three hours after turning in (and the sandflies making a feast of my skin), we woke up to an orange slit on the horizon. The sunrise bathed the beach in faint orange, and that’s when we realized why Subic Beach was said to have pink sand—the white sand mixed with weathered red corals appear to glow pink at this time of the day. 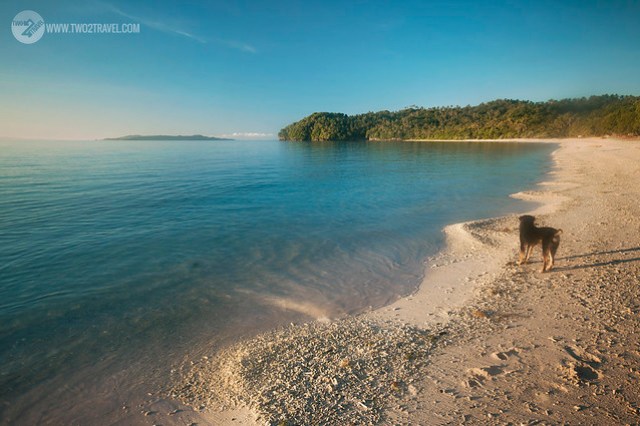 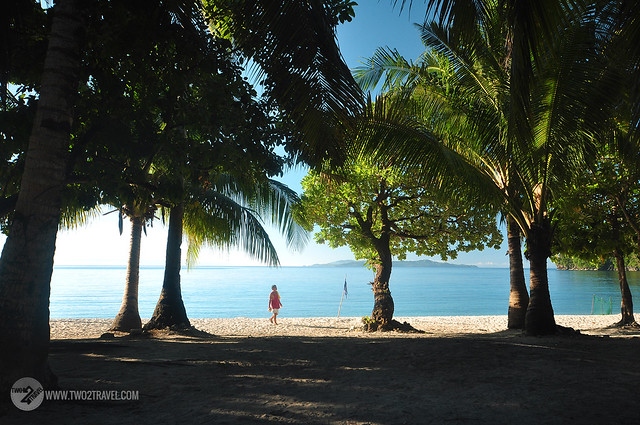 We spent the good part of that morning beaching ourselves out in its cold clear waters. The sandy bottom had a smattering of coral stones so we had to wear our slippers while swimming. But not even that, nor the lone jellyfish that Owen spotted bobbing on the water surface, marred our sweet little time with the beach. If any, the water was so clear you could spot the jellyfish from five meters away. 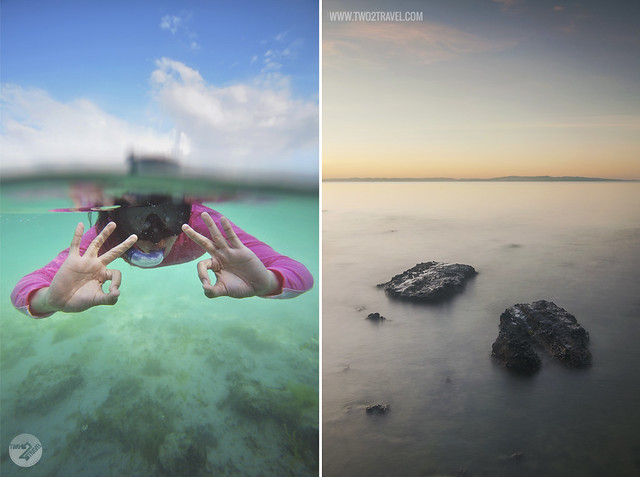 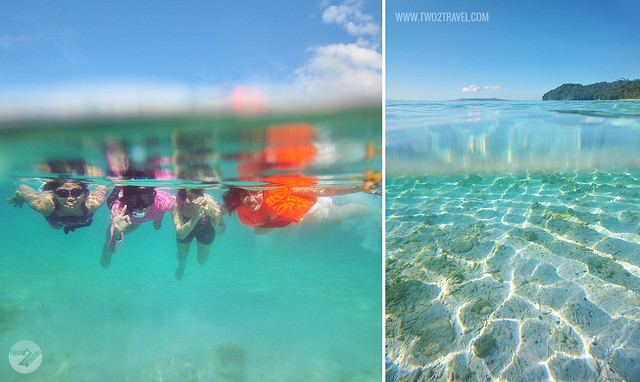 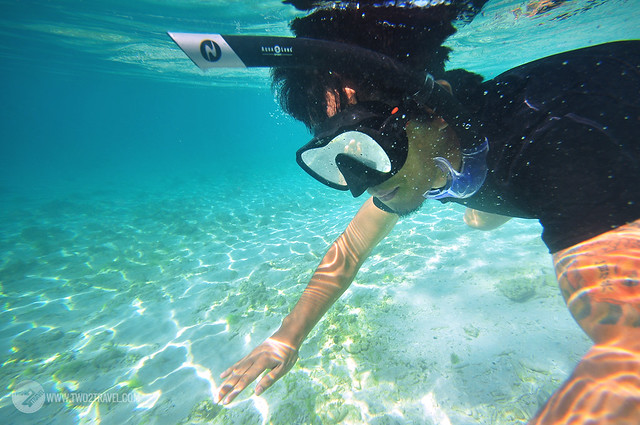 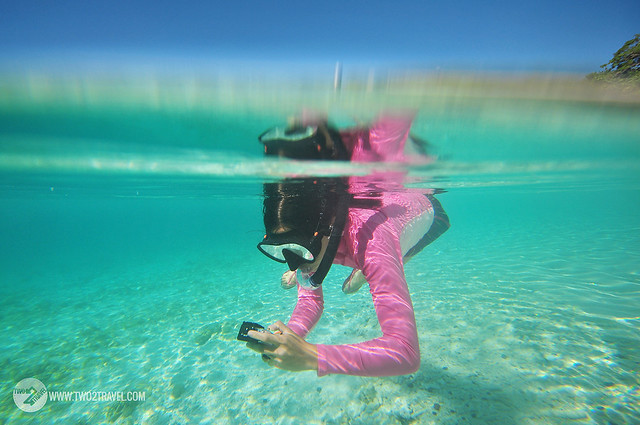 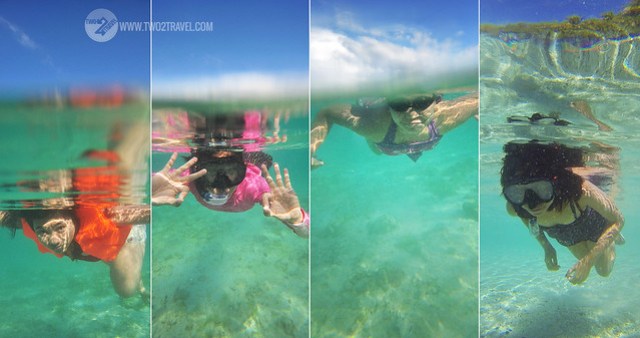 Pink sand or not, sandflies and all, Calintaan Island redeemed something we thought was slowly getting out of our system. It brought back that sense of wonder, and it was a gift that just kept on giving. 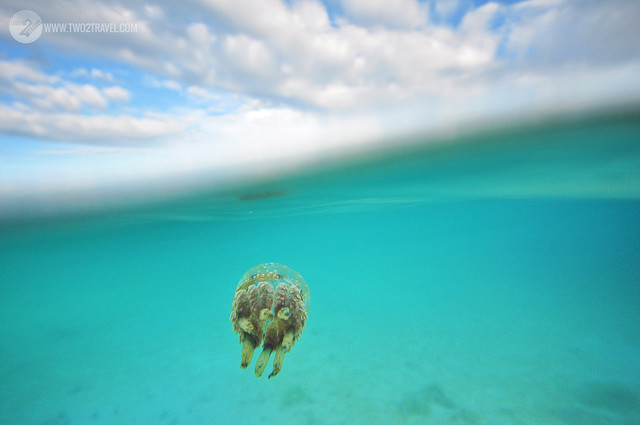