Last year, we made it our mission to see as many festivals around the country as we can. Thankfully, we were able to get on a couple of trips, even if it meant squeezing our pockets dry (and this has been the story of our lives ever since). 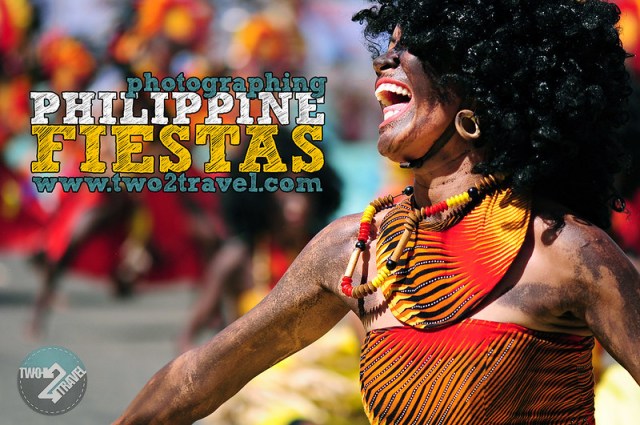 We found festivals a great excuse to travel. We would like to think that our love for seeing them fueled our passion for traveling even more, because aside from taking home photos of very colorful performances, we were also able to discover lots of beautiful places, taste good food, and meet interesting people on the side. It was a great way to get started—and start we did, because we haven’t stopped ever since. 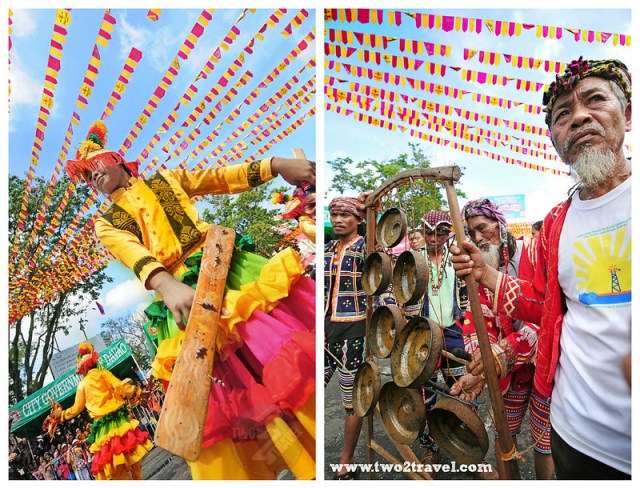 To date, we’ve seen Sinulog, Dinagyang, Panagbenga, MassKara, and Kadayawan together from January 2011 to January 2012. We are yet to tick off several on our festival bucket list though, including Moriones, Pahiyas, and on a much grander scale, the Carnaval in Brazil. 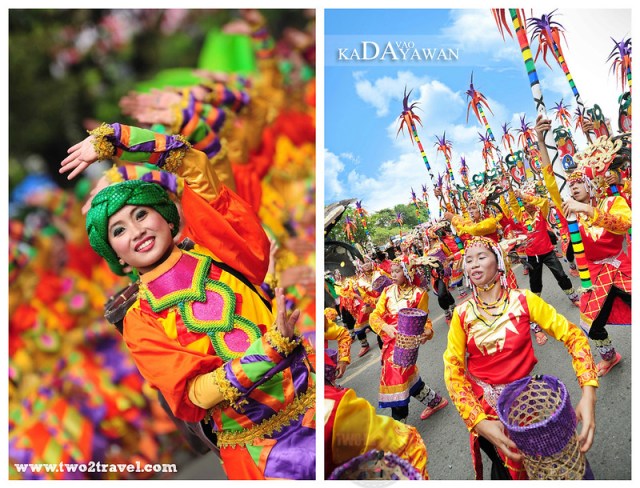 And as it does with beaches, the Philippines did not disappoint with its festivals. Our fiestas are crowded and noisy, and the energy is always very infectious. In Iloilo, where we’ve seen the Dinagyang twice, we would sleep and wake up to loud thumping sounds from giant speakers located somewhere at the end of our street. And every single street along the festival strip has these speakers too. Know what’s a bit bewildering about that whole speaker thing though? Read our post on it. 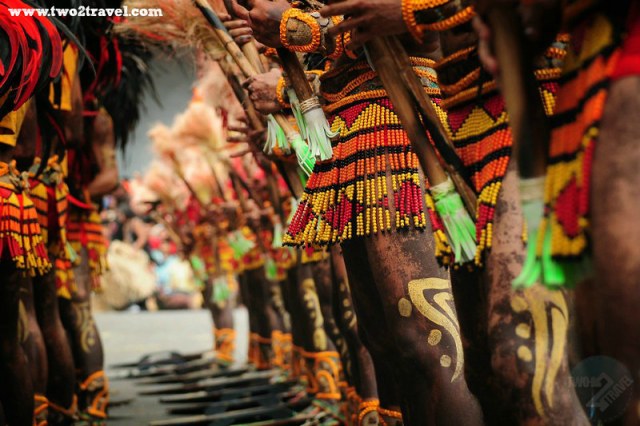 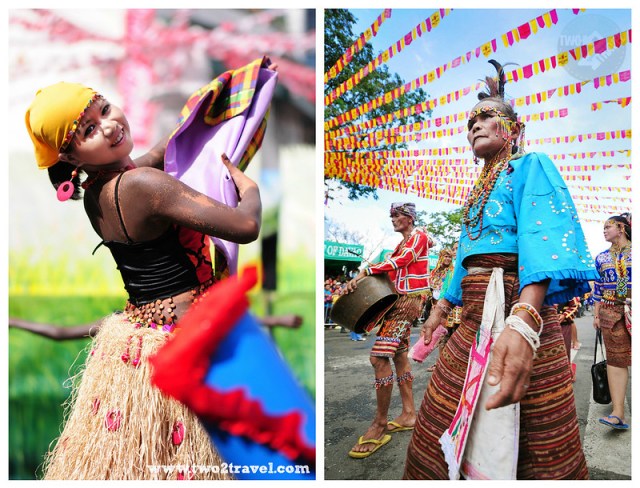 Wrestling through a crowd under the sun for one whole day may not seem pretty, but it really isn’t that bad. Besides, for a once-a-year show, who wouldn’t walk the extra mile? 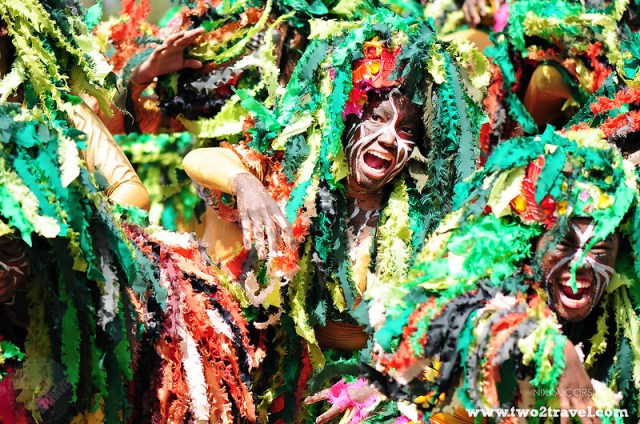 So how is it like walking along our busy, energetic festival streets anyway?

1. It always goes down to walking.

No matter how much we tried reducing the distance we had to walk (taking pedicabs, dropping off at the nearest area reachable by jeeps or cabs), we always end up walking kilometers until we would be cursing each other out of frustration (hey, no one else at which to vent our anger and hunger!).

Save for Dinagyang where shooting is always a breeze thanks to assigned stations, all others required walking during the parade (sometimes running, back and forth, back and forth, until we felt like a disembodied creature holding a camera for some reason, light-headed and unable to feel our legs). 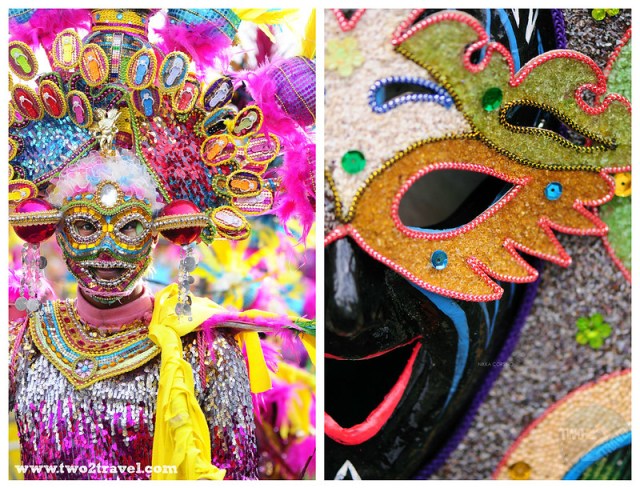 When it comes to walking, Cebu’s Sinulog holds the record for both length and distance (though we didn’t measure the latter). We walked for 11 hours during the Carousel Parade, from 7 AM to 6 PM, which was thrice longer than we normally do in other festivals. Obviously we didn’t know Sinulog lasts the whole day—LITERALLY—so we just kept shooting until our legs gave up.

2. IDs do a much better job than muscles (but they come at a price).

Securing IDs so we can shoot within routes could get really expensive (priciest is Sinulog at P1,000 each, others average P500). But that’s another price we had to pay so we won’t have to wrestle against crowds (and so we can avoid dagger stares and the occasional expletive from those who don’t want somebody messing with their space). 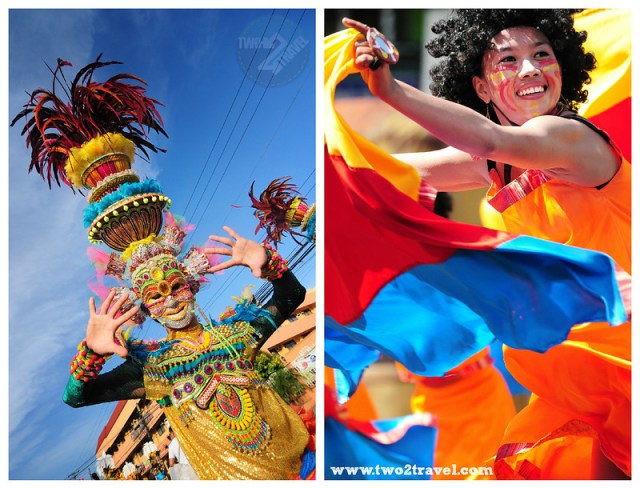 The festival that gives you your money’s worth is Dinagyang (P500) because organizers would assign you to one of four judging stations where you can sit right in front, one meter from the performers who are going to be facing you (that is, if you head there by 6:30 AM to get the best seat in the house). Although the biggest judging area (this year it was the sports complex of Iloilo) gets the biggest crowd, we always opt for the smaller stations because we could shoot nearer. 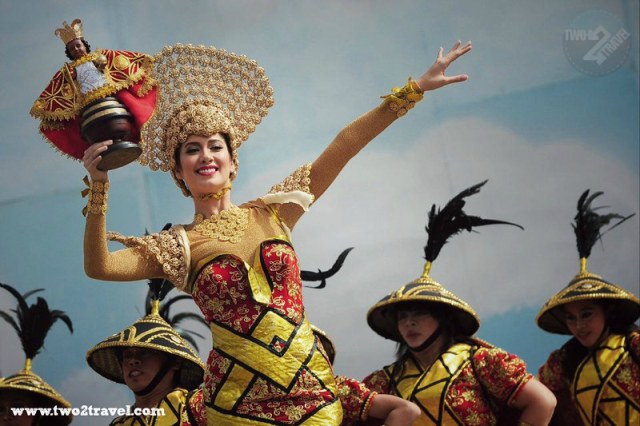 Sinulog. Every group is led by a Festival Queen, representing Reyna Juana, who dances while holding an image of the Sto. Nino 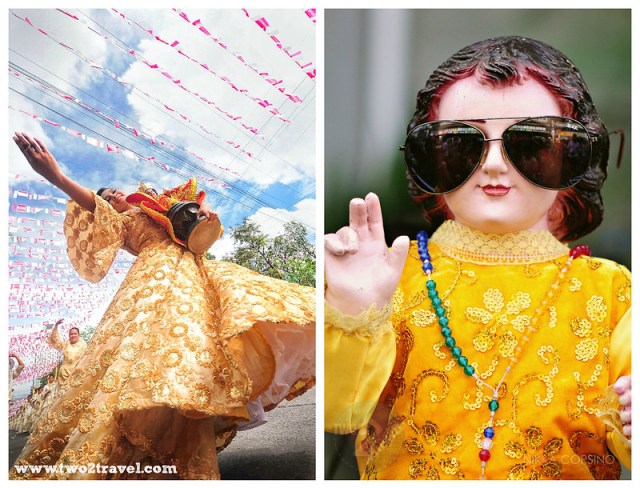 Sinulog (R) A Sto. Nino image along the streets of Iloilo 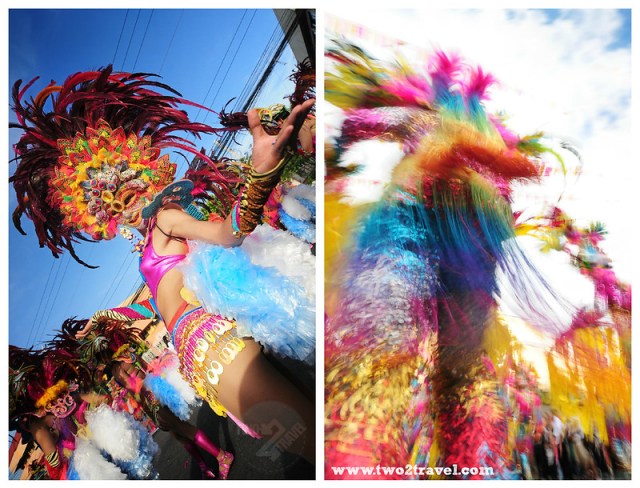 Most difficult to shoot even with IDs had been Sinulog, because the final stage was set off one kilometer about 10 meters from where photographers can shoot. So unless you have a 600mm, which means you’re rich enough to stage your own festival, you have to go to the streets. And going to the streets means having to struggle with something else—>

3. Sometimes you have to bring your own ladders.

We didn’t expect to see these, but, well, we saw them. Apparently, photographers during the Sinulog bring their own ladders, the short ones that set you off the ground for about two feet. Spell competitive—LADDERS. And then we looked at some of the winning photos of the past years—some of them DID look like they were taken either by an incredibly tall man who was looking down, or by someone who was stepping on a ladder. So we guess ladders do a much better job than IDs and muscles combined?

4. You can only have one lens to give you that winning shot.

Changing lenses when you’re in the middle of all that activity is not just difficult. You also might get bumped by some random festival goer while doing so, your precious nano-coated gold ring getting thrown off your hands and into the rough concrete on the other side of the street. Yay.

Passing by MassKara dancers along the streets of Bacolod

What we do is just use one lens each and exchange cameras every now and then. So far we have only fought over one shot where one of us HOGGED one lens during a very good performance that required a wide-angle (spell swapang with a capital S, or maybe a capital O). 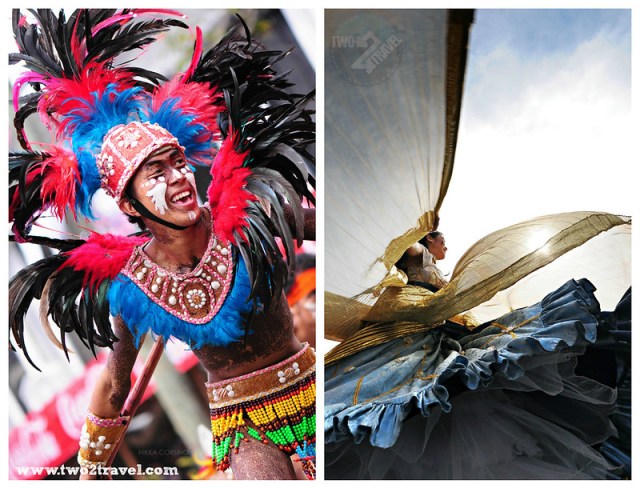 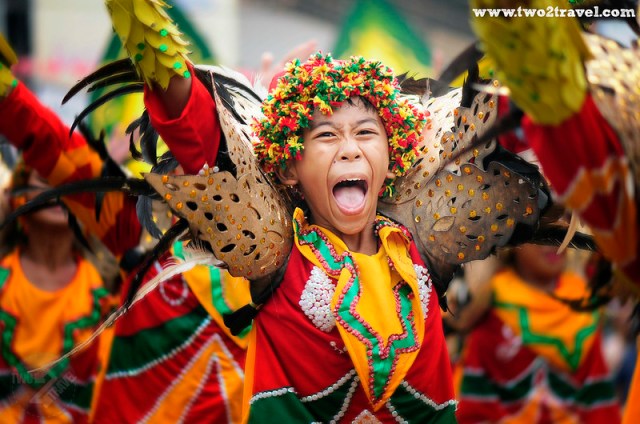 5. One whole day (or two whole days) of shooting is all about just one shot.

But if we did get around to taking that one good shot, it’s reason enough to return the next year. 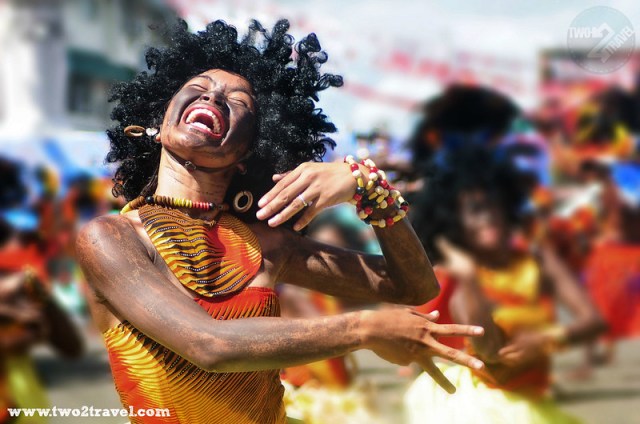 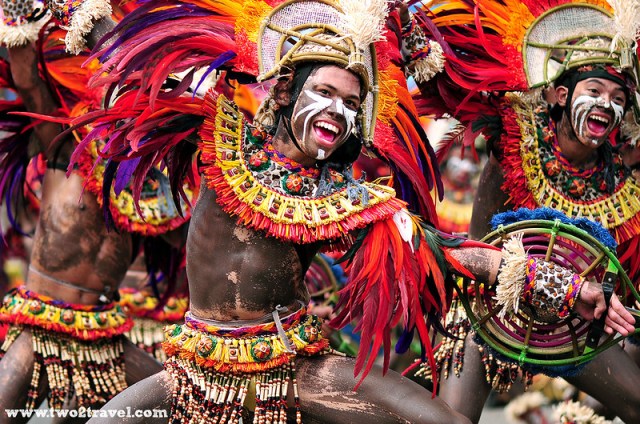 6. We would be missing out on the fun if we didn’t go.

It’s always a different world in the provinces during fiestas, where every local becomes a tourist and every tourist feels right at home. It’s a shame we can’t go every time there is one (and in the Philippines, it’s true that every quiet coastal town, remote mountain village, or bustling city has one fiesta happening every day). But it’s reassuring enough that if we do decide to go, it’s always time and money spent well, even if it means going home broke and with an uneven tan afterward. 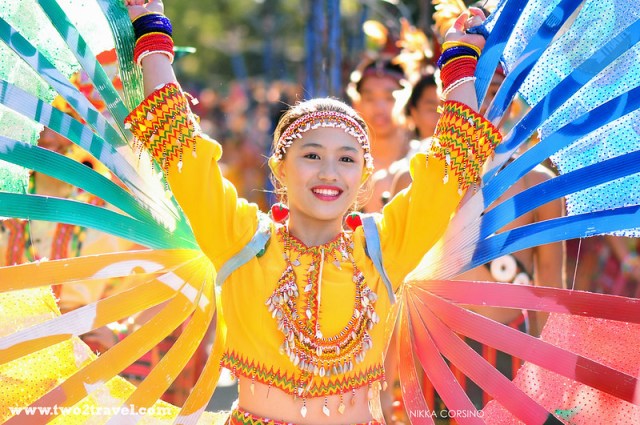 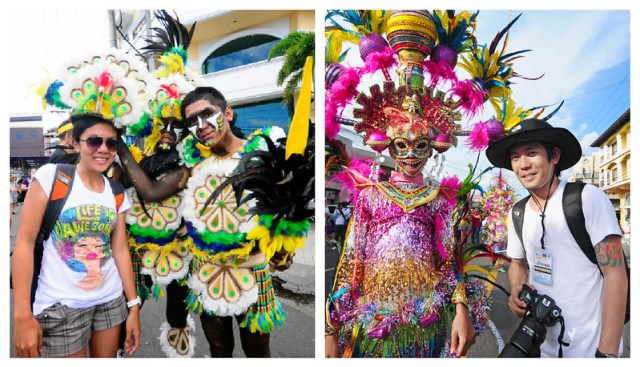 GET STARTED THIS MONTH:

MASSKARA in Bacolod City is happening on the third weekend of October. You can get your Festival IDs from the Camera Club of Negros, which is hosting a photo contest this year. Visit their website to know more or contact them through ccnegros[at]yahoo[dot]com. If you want to go around, we’ve put together a one-day itinerary for you, including alternative means to go to Bacolod since airfare nowadays have most likely gone up. 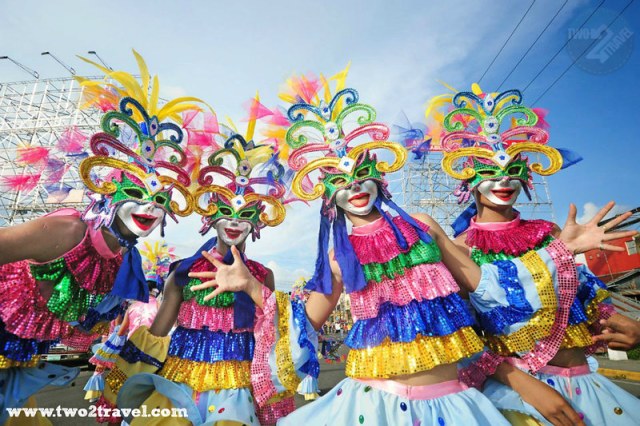 OTHER FESTIVALS YOU MAY WANT TO VISIT

Of course, there are other festivals all around the Philippines worth putting into your calendar. Care to share which is happening in your own province? We’d love to include them in the list too. :)

So you wanna see the Philippines? Go festival-hopping. You can never go wrong.