December 21, 2012 didn’t look like the right day to learn anything new, thanks (or no thanks) to John Cusack’s mad limo driving skills.

We don’t know about you, but we did spend the good part of the year before that wondering what would indeed happen. We were curious if, indeed, nature will all kill us off by some cosmic freak accident.

But then that Friday came and we found ourselves chugging ice-cold orange juice and facing the sea (which didn’t look like it was about to swallow us whole), contemplating on one thing: surfing. 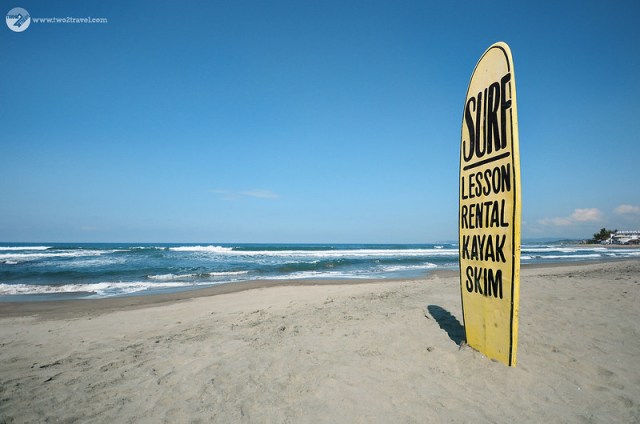 (And don’t ask about the orange juice. It was way too early for beer.)

A week before this, we were on the same beach in San Juan taking photos of kids with special needs riding their first wave. That afternoon, we also saw a pro surfer from Siargao cutting across the waves with such intensity you’d think he was attempting to slice the seabed in two.

We watched surfer after surfer, including a kid who looked no more than 12 years old, take on the waves as easily as they would walk on land. They looked so at ease with their bodies on surfboards that by the time we went home, and with prodding from Elaine, we were seriously thinking about giving surfing a try (feelingero at feelingera lang?). 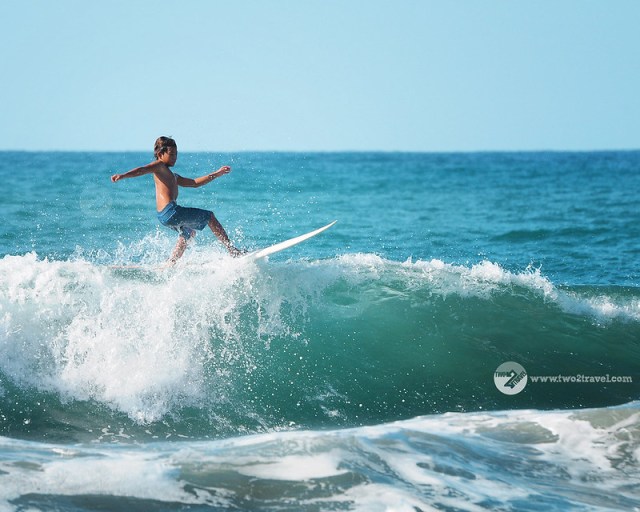 And then, a week after—December 21—we found ourselves with two instructors and two surfboards twice our height, all end-of-the-world thoughts forgotten. 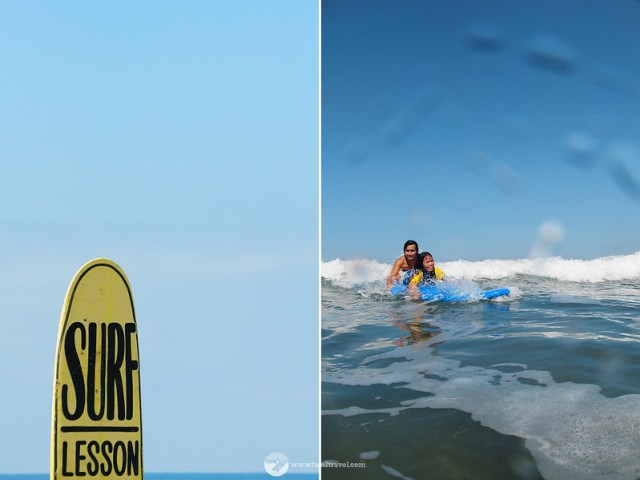 Our instructors Roger and Toto of San Juan Surf School handled everything very coolly. Obviously it wasn’t their first time to teach people as alien to balancing on water as us, and we appreciate how kind and patient and fun they had been during our lessons.

So how was it, riding our first wave?

Oh it was SO MUCH FUN! Somehow we felt weightless on water, seeing and hearing nothing but waves and focusing on nothing else but keeping afloat. Now we understood why the surfers we were observing the week before stayed in the water for two or three hours straight!

Probably the most thrilling (or the scariest?) part of it was whenever the instructor pushed our surfboards forward and told us—very urgently—to go and stand up because a wave was coming from behind.

And that was when the riding came. It was expectedly wobbly as we struggled to find balance, but the longer we rode, the easier it was to gain footing. Of course, since we were beginners, we were positioned parallel to the path of the waves. 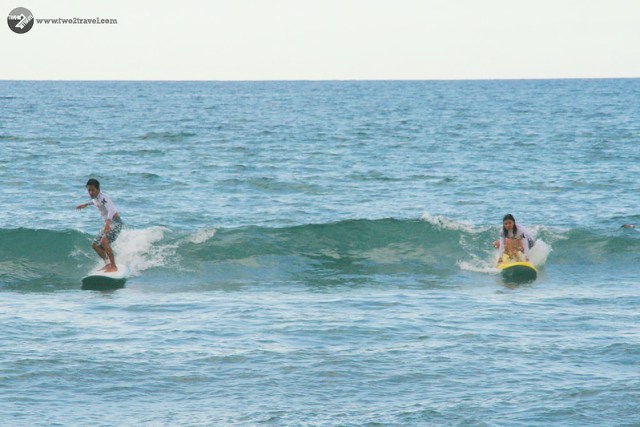 We didn’t know we got on the same wave until we saw this! LOVE IT! Photo by Elaine Abonal

Surfing also gave that sense of fulfillment at finally doing something we thought was beyond our ability (look ma, I can float on a freaking surfboard!). Very, very cool indeed. 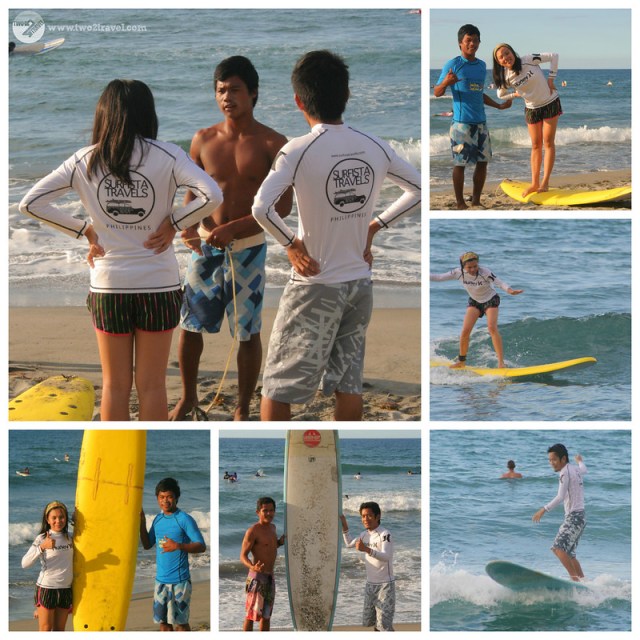 A bonus? A lovely sunset, crepuscular and all, which we spotted while we were floating on surfboards in the middle of the waters. It isn’t everyday we get to experience sunsets on surfboards, or balance ourselves on moving water for that matter. For that, we are—how do they call it? Ah, stoked. 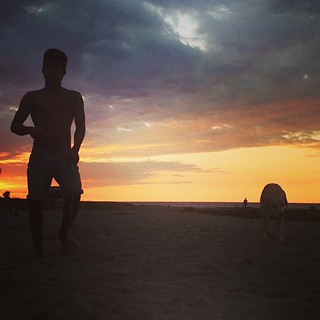 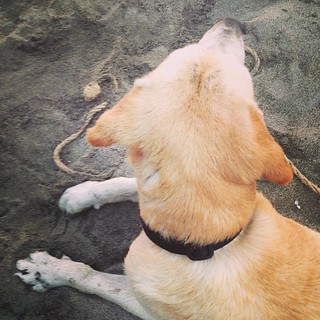 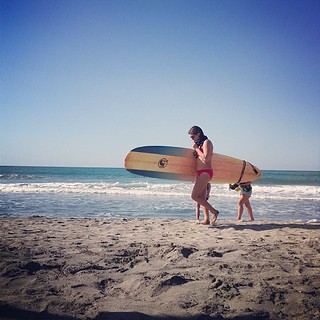 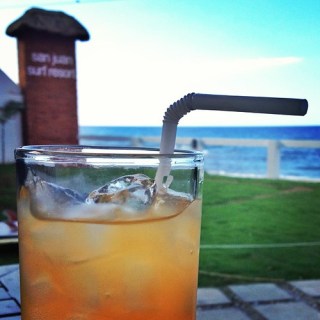 ~
Big thanks to Elaine of Surfista Travels and Luke, Kuya Toto, and Roger of San Juan Surf School for letting us ride our first wave!

NOW, if you’re like us who have always wondered how surfing is and would like to try something new this year, why not join one (or both!) of Elaine’s upcoming Surfista trips this February and March? Surfing has this liberating and happy vibe you won’t find anywhere else—besides, nothing beats ice-cold beer by the beach after!!!! 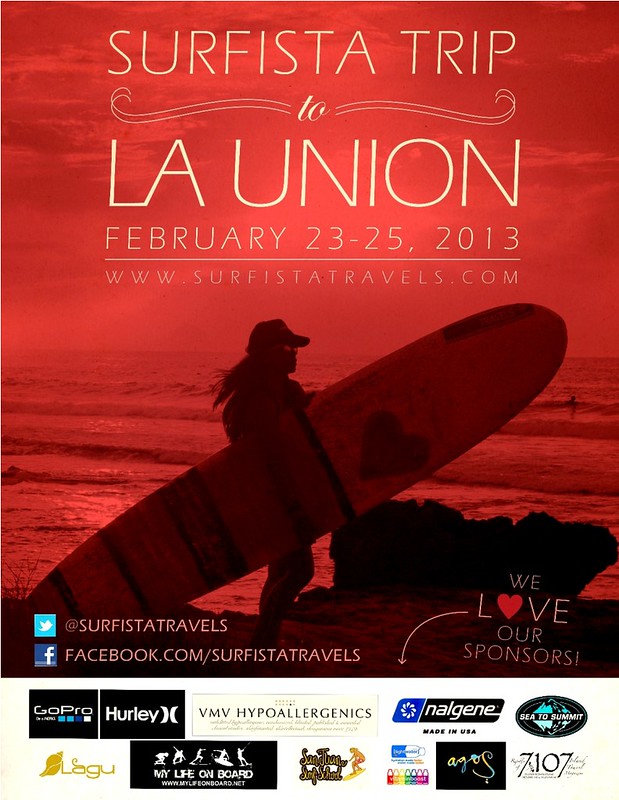 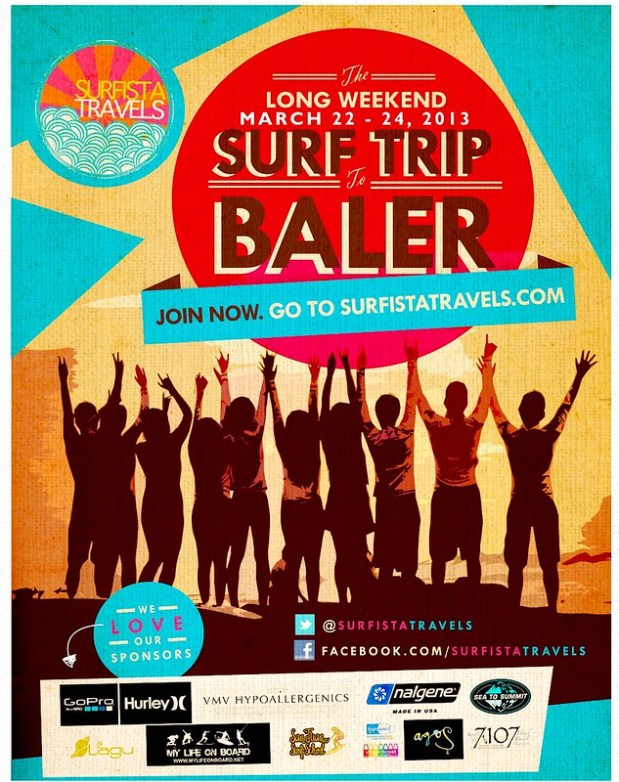 Summer Surfista Trip March 22-24 to Baler. Click on the photo to know more