We’ve told you: Moalboal is one of our absolute favorites in the country.

We had one reason for visiting the town: to see the sardine run. At the end of two dives—one at Pescador Island and one at the reefs just off Panagsama Beach—we were left awestruck. It was, by far, one of the best dives we’ve ever had. It’s right up there with seeing such trophy creatures as the thresher shark in Malapascua, and lots and lots of sea turtles in Apo Island.

END_OF_DOCUMENT_TOKEN_TO_BE_REPLACED

No, Moalboal was not part of any plan.

We would be spending three weeks in Cebu, yes, so we knew we would be visiting the town eventually. We just did not plan on doing it that soon.

We were inside a bus approaching Cebu City, having just come from a week-long stay in ATM-less thresher-shark-filled Malapascua Island. We only had P20 left in our pockets, which could carry us only as far as the nearest mall to replenish our funds. It was nearing dark, we had already been traveling for more than five hours, and we had psyched ourselves to collapse into sleep as soon as we arrived—which, until that moment, was supposed to be less than an hour away.

Apparently, that did not happen.

Somewhere along Mandaue before the bus could even reach the terminal, we decided that, yes, we would be going to Moalboal that same day. This meant another three hours on the road. But what the heck! We wanted to see the sardine run! 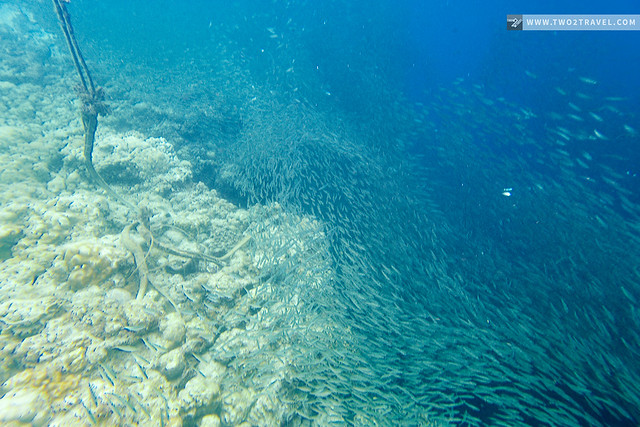