So this is what the fuss has all been about: huge waves crashing against jagged cliffs, some coming ashore to fill a busy network of canals at the base, no doubt shaped through time. And this has been what we walked an hour for under the 12 noon sun. 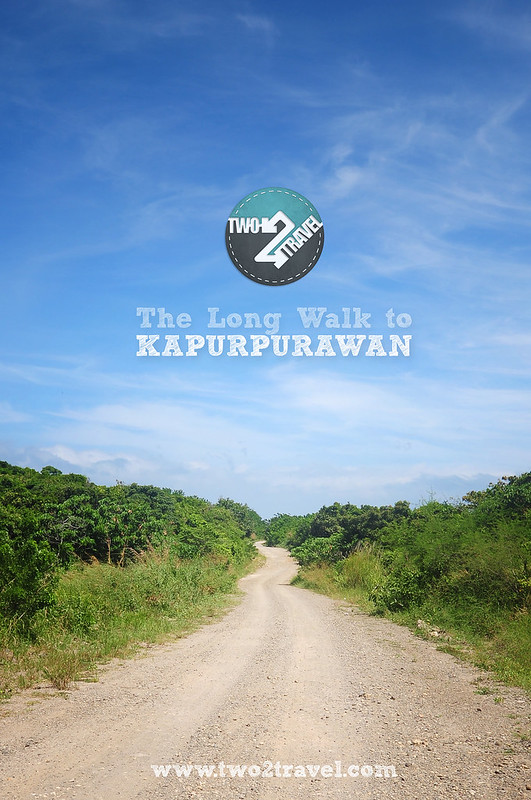 When we set out for Ilocos, we tried to veer from the usual trike rides that are commonplace in the region. We were hoping to rent a motorcycle to go around instead, because we hated the idea of having to commute to every place we wanted to visit. We wanted more control of our time, our route, and our budget. But we were in for a disappointment. 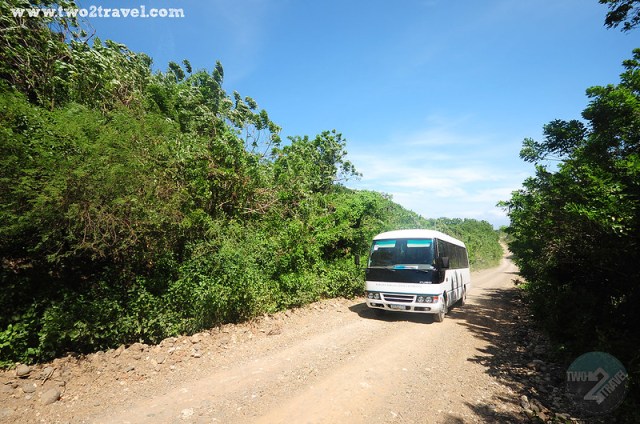 Resigned to our fate, we either had to fork out cash for every place, or else walk to it. We underestimated 3.6 kilometers—the distance from the highway to the jump-off point to the Kapurpurawan Rock Formation in Burgos town, Ilocos Norte—and decided to walk. 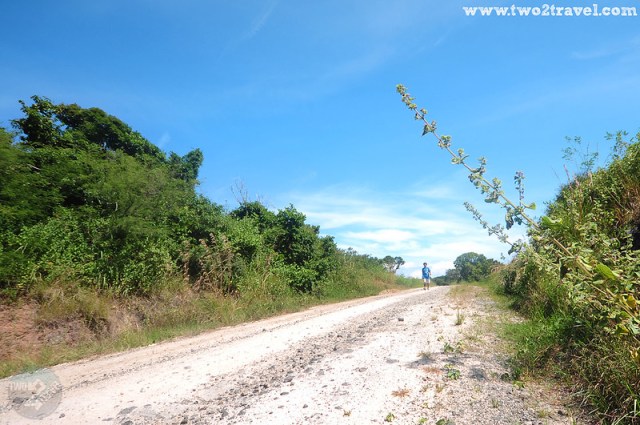 As if to reassure (or not), this man told us it’s going to be just a short walk. 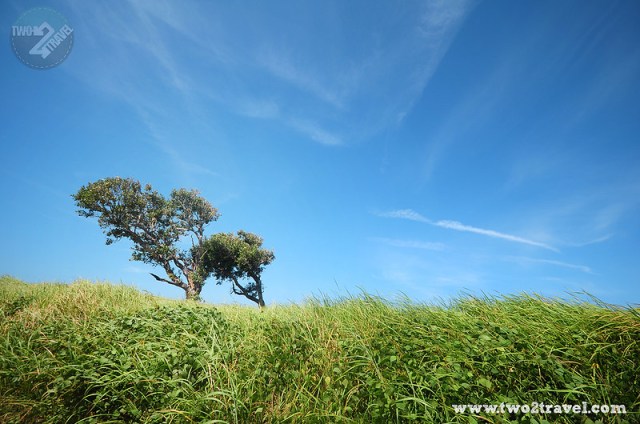 At least the day wasn’t ugly. 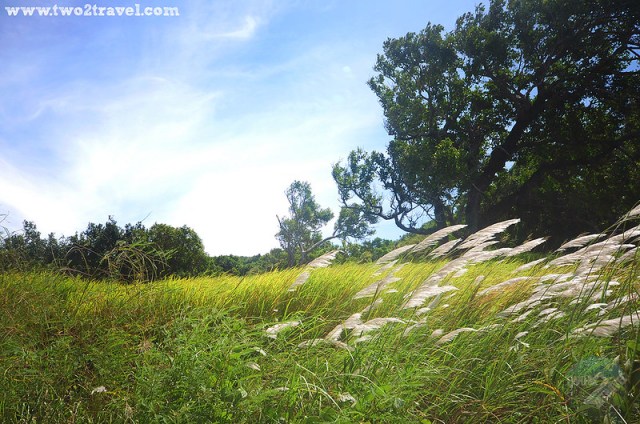 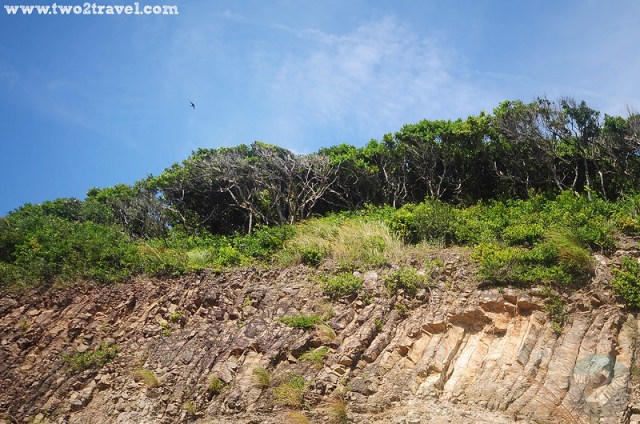 In hindsight, it wasn’t so much a mistake as another part of the adventure, because Ilocos’ most rugged vista definitely did not disappoint. 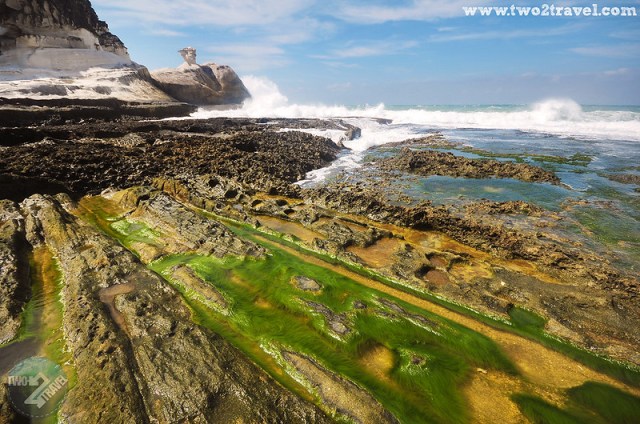 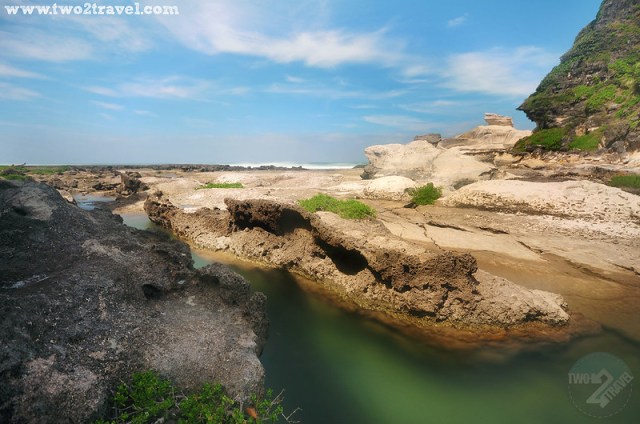 To describe the winds in this part of the world as strong would be an understatement. Anyone under 40 kilograms may want to cling to somebody heavier for support. Seriously. 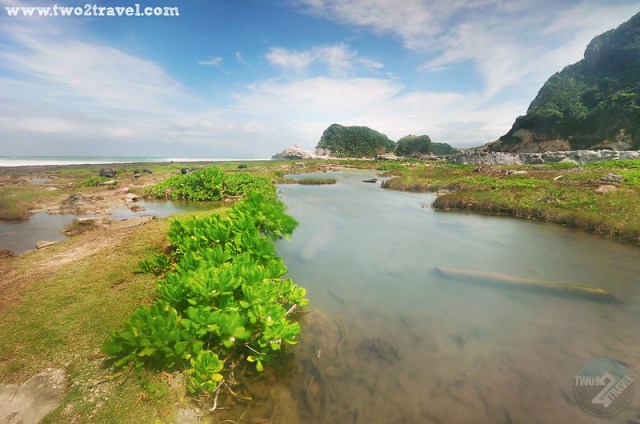 The Kapurpurawan Rock Formation (puráw is Ilocano for white) sits by its lonesome on its sentinel far from the clearing, looking divine in white it looks almost like an apparition (not that we’ve seen one).

It faces the West Philippine Sea, whose waves could give those in Bangui a run for their money even on such a fine day. The sight of the waves crashing against the cliffs, reaching almost two thirds their height, was both scary and mesmerizing. This sandstone mound was formed to its current shape by the same strong winds and waves. We doubt if it would still look the same in the coming years. 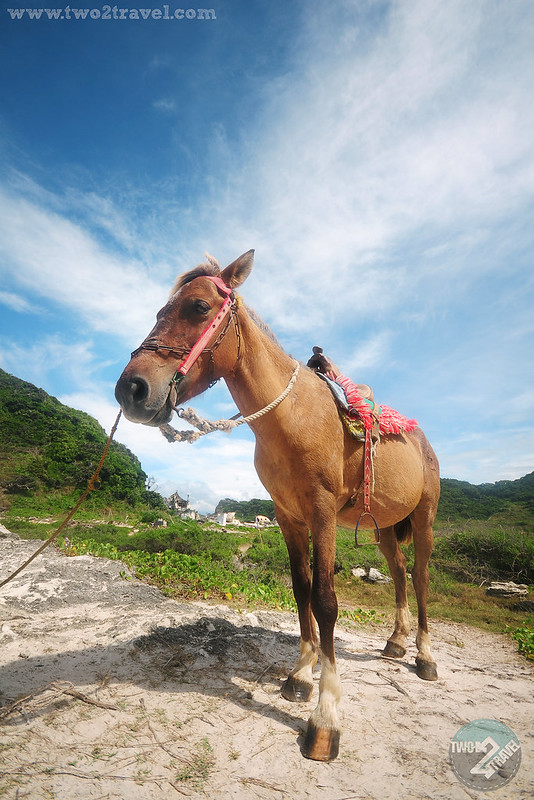 There are horses for those who want to go all Indiana Jones for P100. But hey, spare the animals and just walk. 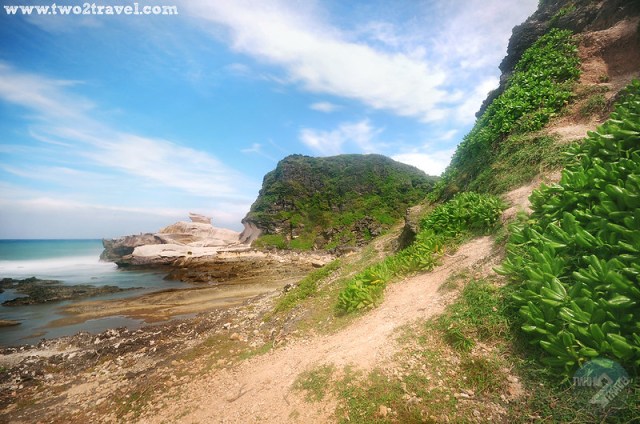 This early, the formation has already been closed to visitors (we surmise it’s to protect it from crumbling all too quickly because of all those who come to visit it everyday). During our visit, there was a concrete elevated walkway under construction spanning the clearing all the way to the base of the mound nearest the formation. 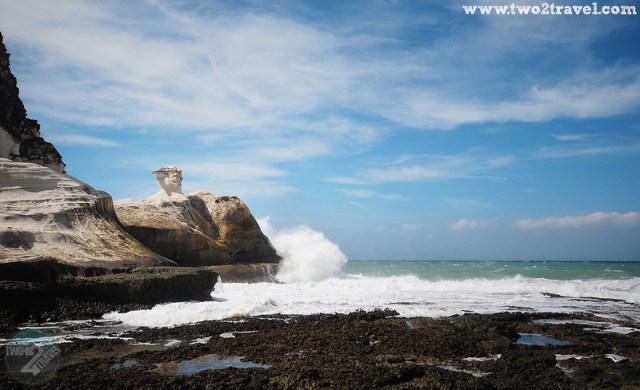 Anytime of the day is a good time to visit (except of course when the weather’s acting up). We would have wanted to stay for the sunset but we still had to catch a bus to Laoag. And thankfully, there was a trike at the jump-off point to the formation that ferried us back. Coz we didn’t want to walk anymore.

HOW TO GET THERE

By private car: The rock formation is located in Burgos town, about an hour away from Laoag. Look for the huge Balinese-style cabana of the Ilocos Norte Tourism Office on the left side of the road, which marks the entrance to the formation. From here, it’s a 10-minute drive inland through an unpaved road.

Commute: There are no tricycles (or any means of public transport) waiting for visitors at the entrance, which we think the government should seriously do something about (since not everyone comes in cars). For this you have two options if you’re coming from Laoag:

Board a mini bus for Pagudpud in Laoag City (terminal is at the back of the provincial capitol) and drop off at the entrance to the Bangui Windmills in Burgos town (travel time is about 1.2 hours). From here, you may hire a tricycle to take you to both spots (windmills + Kapurpurawan) for about P300 roundtrip. From the entrance to the windmills, the trip to Kapurpurawan may take 20 minutes.

Board a mini bus for Pagudpud (travel time is 1.5 hours, fare is P60). Buses drop off passengers at Pagudpud’s sentro, where tricycles are readily available to take visitors to the so-called South Tour for P600 roundtrip (cost will be divided among three passengers max). Try to haggle but don’t squeeze them dry, because in all due fairness, the places are a bit far from Pagudpud.

This tour will take you to these spots:
1. Cape Bojeador Lighthouse, Burgos
2. Kapurpurawan Rock Formation, Burgos
3. Bangui Windmills, Bangui
4. Bangui Windmills Viewdeck, Bangui (or Burgos, we’re not sure; it’s just along the highway)

If you’re coming from Pagudpud, you can have your DIY trip on the way back to Laoag (just like we did), but head early as the sun can get too harsh considering you’re going to be outdoors most of the time.

First stop will be Bangui (fare is P25, 30 minutes from Pagudpud), where you can hire a tricycle to take you to the windmills and to Kapurpurawan. If you want to head to Cape Bojeador too, tricycle hire may go up to P400.