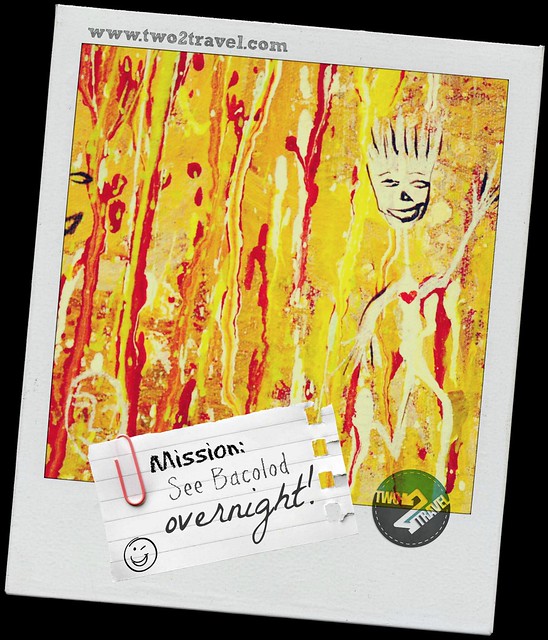 Bacolod is home to many delightful pieces of the Filipino puzzle. A plethora of sights—some souvenirs of its past and others a colorful parade of its present—welcomes every visitor to this Western Visayan city. Though 24 hours is arguably short for any trip, it was many times more so in Bacolod—just as we had experienced during its busiest weekend of the year, during the MassKara Festival.

But an overnight stay should be enough to get a taste of Bacolod’s famed wonders, from history to the arts to food to the beguiling warmth of its people’s smiles. Head to Bacolod any day of the year, and get ready to fall in love—overnight. 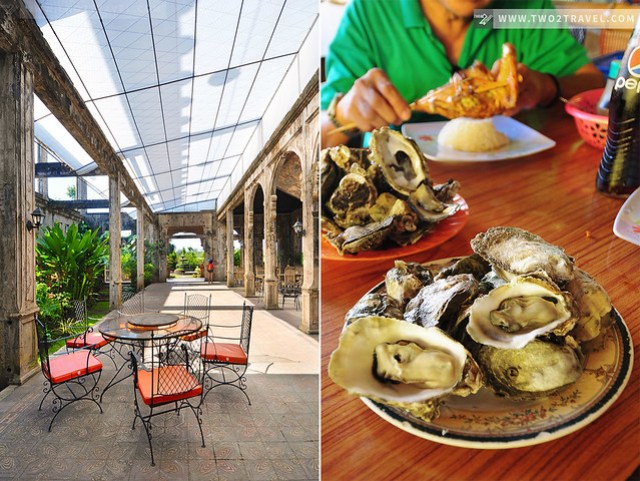 In Bacolod, you can dine amidst Spanish-era ruins (left) or in simple carinderias (right)

The so-called Taj Mahal of the Philippines is an early 20th century Italianate ancestral house owned by a sugar baron, who built it as a profession of undying love for his wife, who had died in an accident.

This is easily the most photogenic building we’ve seen. The colossal gray skeleton, survivor of a fire at the end of World War II, looks cheery against the bright blue sky and the deep green lawn, well kept and beautifully landscaped with a four-tiered fountain at the center. Built around vast sugar plantations, it is said to be even more beautiful at night as it is bathed in different dazzling lights. The sunset can also be viewed from its belvedere on the second level.

During the day, you can try sipping coffee where the original dining room was at the house’s first level. In place of the usual long table are wrought-iron tables and chairs, with piped-in piano music, shafts of sunlight streaming into the windows, and a magnificent view of the century-old fountain farther off.

*The Ruins is around 20 minutes from the Bacolod city proper. Take a jeepney (Bata route) and ask to be dropped off at the Bangga Rose Lawns Memorial Park, then hire a tricycle to The Ruins for P10 per head (22 cents ). A P60-entrance fee (USD 1.36) will also be collected. The Ruins is open daily from 8 AM to 8 PM.

10 AM | Experience storytelling the Negrense way

Right smack in the middle of the main gallery is a life-sized replica of a batil, a cargo boat about four times the size of a regular fishing boat used to transfer goods to and from Negros. The painstaking effort it took to put together this piece—everything else in the museum, in fact—is admirable: on the boat are mock-up baskets of fruits, several crates, as well as barrels of Tanduay (a local rum brand which operates a distilling plant in Bacolod. Sugar cane, it must be noted, is the main ingredient in rum production). 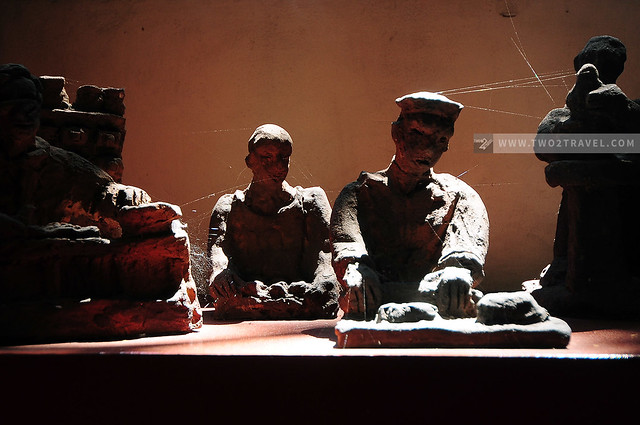 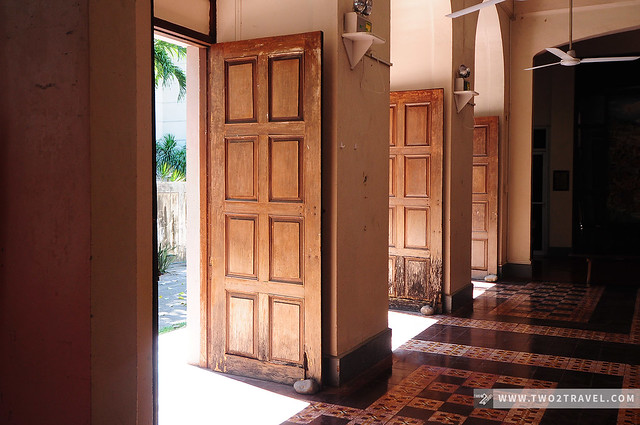 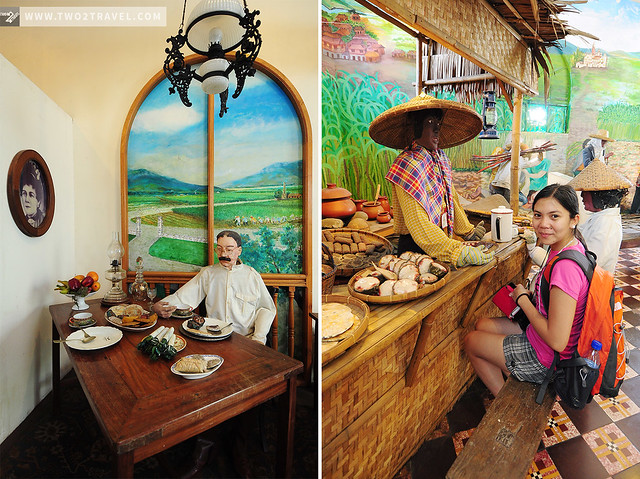 A steam engine, also called an Iron Dinosaur, is also on display along with the batil. A staple in the Negros landscape before, these trains were used to transport harvested sugar cane from the fields to the milling centers. 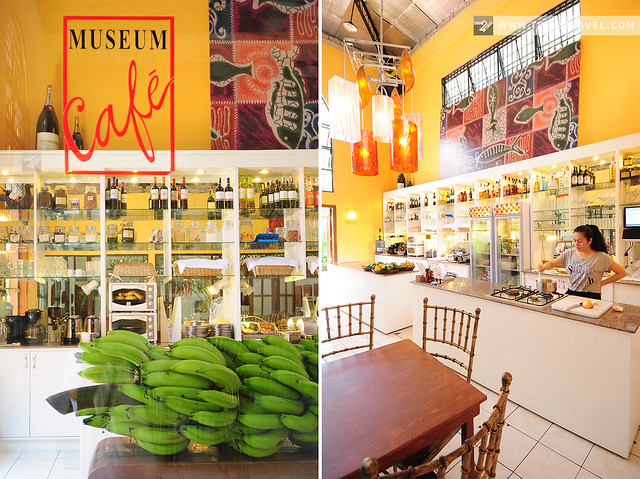 “The Negros Museum is the first in the Philippines curatorially conceived without focus on precious artifacts, but instead on the complex stories and people whose lives make up the stories,” the museum describes itself in its website.

It’s storytelling through art, something that’s very much alive in Bacolod and the whole province, and it’s something that the Negros Museum has lavishly, lovingly put together. 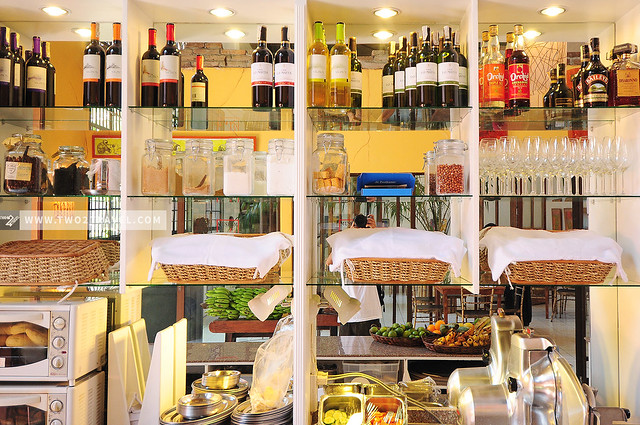 You can walk through larger-than-life murals of myths, rituals, and early life in the island along the first level’s cavernous halls. All these, plus oil-on-canvas paintings, terra cotta sculptures, and bas relief paintings depicting the local life, were created by Bacolod’s homegrown artists—a source of pride for the province and living proof of its vibrant art scene. 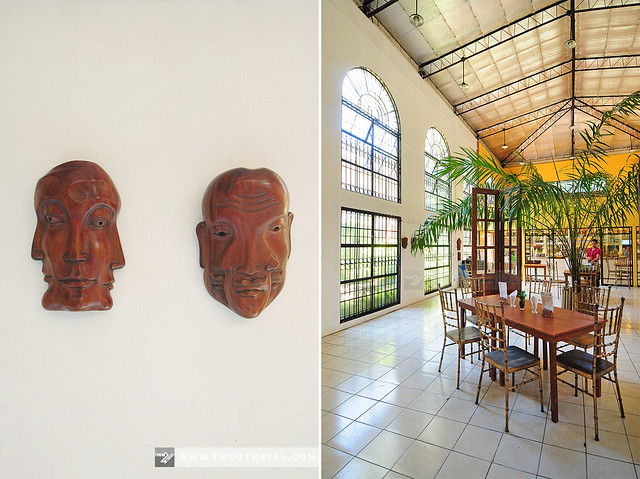 Kids and adults will also love the Jose Garcia Montelibano Gallery of International Folk Art and Toys, a 3,000-piece collection from 60 countries gathered for 25 years. From Russian and Japanese dolls to wooden animal figures, some very intricate, others fascinatingly simple, it’s an interesting walk back our very own childhood.

Now, eating al fresco while surrounded by all that history and art is another experience altogether. The Museum Cafe, which flows naturally from the children’s gallery, serves up homemade bread, cheese, and pastries. It’s a refreshing cap to what would certainly be a tiring yet interesting walk through history.

The Museum Cafe serves up freshly baked, homemade pastries and cheeses, among others.

*The Negros Museum is located at the Former Agricultural Building (old Capitol Building) along Gatuslao Street. It’s a 3-minute walk from the Negros Occidental Capitol, otherwise pedicabs (foot-pedaled tricycles) can easily take you there. It opens 10 AM, Tuesdays to Sundays. Entrance fee is P50 (USD 1). 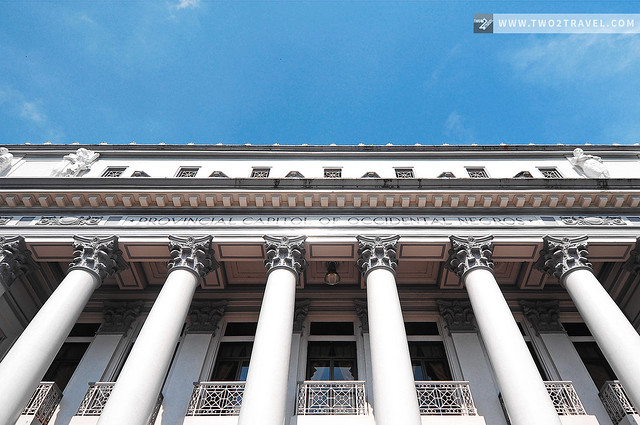 12 NN | Taste the other side of Sugarland in Manokan Country

You can’t have been to Bacolod and not have eaten its chicken inasal (roast chicken)—aside from its sweet treats, of course. Head to Manokan Country for affordable meals and satisfactory serving sizes (Aida’s is a favorite, but we dined at Lion’s Park, which was the preference of our Iloilo-based companions). 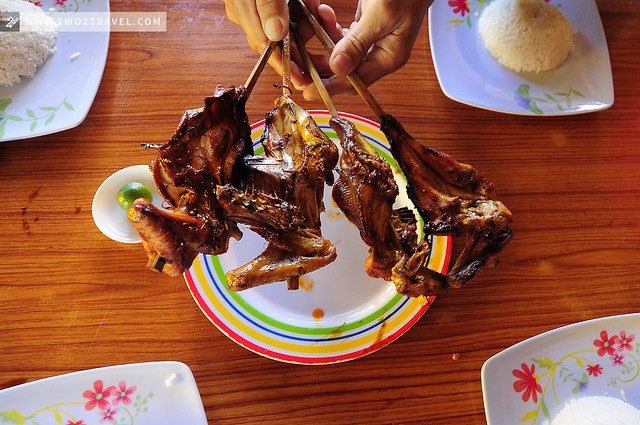 A pecho (chicken breast) with a serving of rice costs Php90 (USD 2). Don’t be surprised if they don’t serve you with spoon and fork though—tastes better when dipped in calamansi and soy sauce, chicken inasal is usually eaten sans fork and spoon, but these are still provided upon request. Finish off your meal with ice cold soda and you’re ready to see more of the sights around. 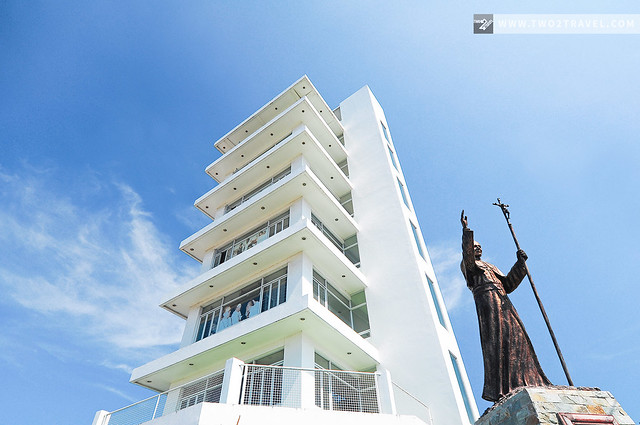 Pope John Paul II Tower. The building sits on the spot where the late pontiff first touched Negros ground, so say the locals.

Eight stories high, this whitewashed building was built in 2010 to commemorate the late Catholic Pope John Paul II’s 1981 visit to Bacolod City (a life-size bronze statue of the late leader was also built in front).

The John Paul II tower features a life-size bronze statue of the late Pontiff, a tribute to his visit to the province.

Seven floors contain the Pope’s memorabilia as well as oil on canvas paintings of the Stations of the Cross done by Bacolod artists. Climb all the way to the viewdeck and see bustling Bacolod on one side and the Guimaras Strait on the other. 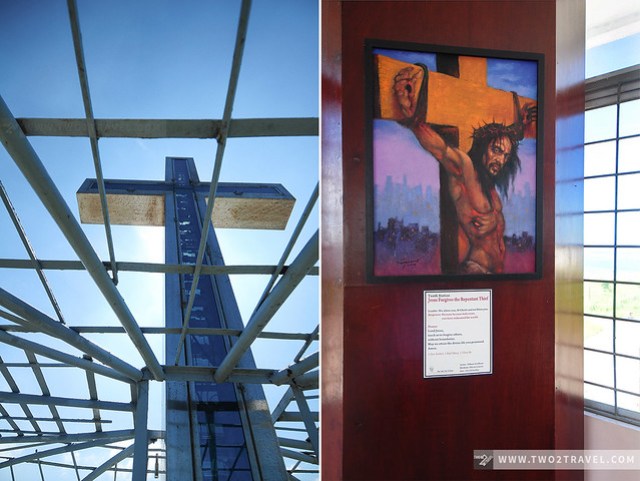 The glass-walled tower, which we didn’t find impressive, contained memorabilia of the pope, including the clothes he wore during his visit. The view from the top was great though.

2 PM | Taste the sweetest of Sugarland

Bacolod is the country’s sugar granary, so we regret not having been able to squeeze in time for a quick sugar fix in the city’s well-known sugar haunts. Calea and Felicia’s Pastry Cafe are two of the most popular—having been recommended by the locals we had asked for tips and directions.

*Calea is along Lacson St., beside L’Fisher Chalet, while Felicia’s is at 6th St.

Locally made products—from native handicrafts to sweets to furniture—are for sale at the Negros Showroom, established to give entrepreneurs an avenue to showcase their products.
*The Negros Showroom is a 3-minute walk from the Negros Occidental Capitol or the Negros Museum.

The whitewashed Negros Occidental Capitol near the Negros Museum

Stop for quick snaps when you pass by these noteworthy sights. All are easily accessible via pedicab.

San Sebastian Church is Bacolod’s oldest church, and is an architectural wonder for its façade’s coral stones from Guimaras Island.

*San Sebastian Church is at Rizal St., in front of the Bacolod City Public Plaza.

Like Iloilo’s Biscocho Haus, Bacolod’s Bong-Bong’s is where you get your pasalubong—a wide array of affordable pastries, including biscocho, ube piaya (a must-try!), fruit tarts, etc. You can find a store at SM City Bacolod and at Gaisano Mall.

Silay is a tourist attraction on its own. Comparable to Vigan, Ilocos Sur in Luzon, Silay’s bahay-na-bato (stone houses) are picturesque historical remnants that are sure to be worth an afternoon trip, as is a stop at El Ideal, a circa-1920s bakery that’s still up and running. Also drop by nearby Balay Negrense, a stone-house-turned-museum.
*Silay is 30 minutes from Bacolod City, but since it’s en route the airport, you can take this sidetrip right after arriving or just before leaving.

When visiting in October, catch the MassKara

The MassKara Festival is one of the country’s most visited fiestas, and the two-day parades on the weekend nearest October 19, Bacolod’s charter anniversary, are the biggest crowd-drawer. Bacolod literally lights up in a dizzying array of colors as masks—some donned by dancers, others hanging on trees as lanterns or being sold as souvenirs—fill the streets, all smiling back at you. The parades (one on a Saturday and another on a Sunday) start in the afternoon so you can spend your morning going around the city. 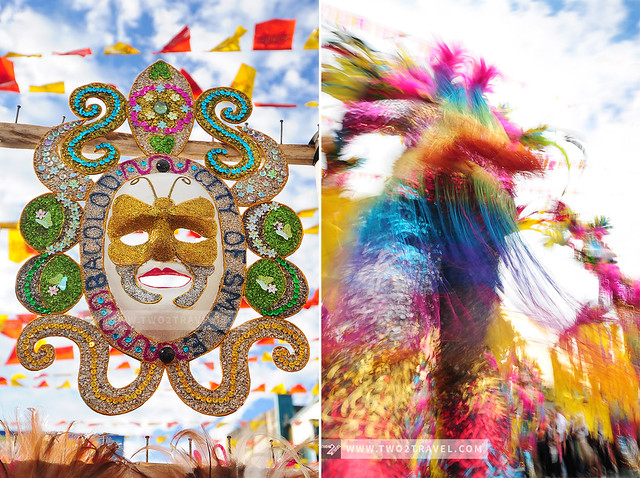 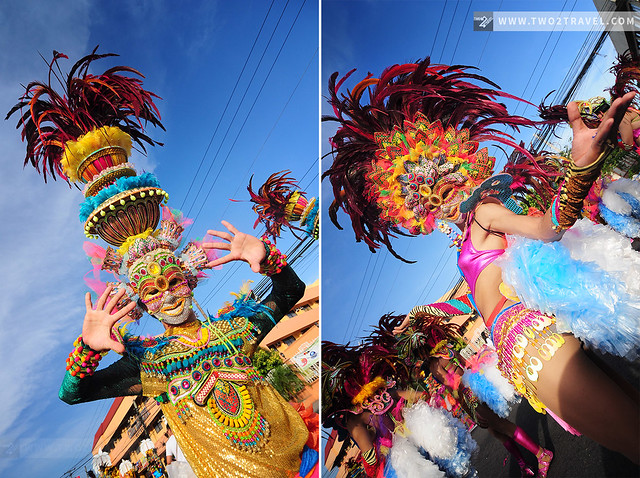 *Access to the festival is free for all, but if you want to take photos up close, you’d need a festival photo contest ID, which the local government provides with the Camera Club of Negros. Details in securing IDs are posted at www.themasskarafestival.com.

Go around via foot-pedaled tricycles, called sikads or pedicabs, at P10 per person. 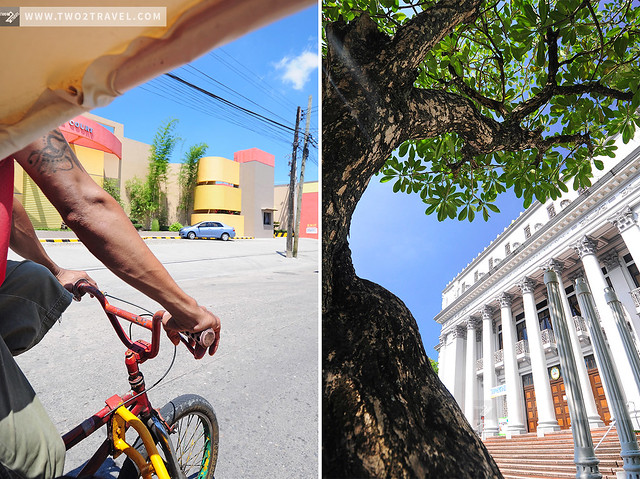 If you have not yet booked your ticket to Bacolod, you can try these alternative routes:

• By air to Iloilo, by sea to Bacolod
◦ From Iloilo airport, take a shuttle (P100-P150 each) to the city center. Drop off at SM Jaro (not SM City Iloilo, which is located farther)
◦ Take a quick cab ride to the port in Jaro where you could board fastcraft ferries to Bacolod (1.5 hours, around P350 round trip). See OceanJet, SuperCat, and Weesam for fares and schedules.
• By air to Dumaguete, by land to Bacolod
◦ From the Dumaguete airport, head to the South Bus Terminal where you can find Bacolod-bound Ceres buses (travel time is 5 hours)